Last week we went back to New York for Thanksgiving to be with my parents. Although I have taken both of them back to the city before, this was the first time we really stayed more than a few days. We usually go in the summer and quickly head to the Berkshires to get out of NY where it is so hot. We stayed put this time, especially since it was the complete opposite of hot. It was the coldest wind my kids have ever felt. It was actually quite fun and a refreshing change, as long as you didn't have to stay outside for too long.

I had some activities planned for us, and I was excited because a few of them were things I loved as a kid. What I didn't plan was how sentimental it would feel to be doing all these nostalgic visits with Twig. We went to visit my best childhood friend for Thanksgiving. Our parents are close so we decided to share the holiday with them. Hand and hand, my little girl and I walked from our house down to my friend's house as I had done countless times as a child. When we arrived at the house I had that familiar feeling I did when I entered each time before. Not much has changed there, and as always we entered through the back door. A few things had been rearranged but the only big obvious change was that we had all multiplied. There were our two husbands, and then each of us now have two children. Our older girls are around the same age and our youngest are only a few months apart as well. It all felt so comfortable. The kids had a great time, and I felt this New York part of me that often, feels under nourished in Los Angeles, click right into place back at home, this time with my kids in tow.

The other adventure I went on with my very appreciative 5 year old was to see "Annie" on Broadway." It was something I wanted to do with her since her birthday, and we weren't able to get tickets over the summer. This time we planned well in advance and got two great orchestra seats. She was so disappointed over the summer  that we couldn't go that I kept this one a secret until it actually happened. She is so in love with the music, the movie, and even a bad local production, that she sat still for the entire two hours, that I knew she would appreciate a real deal show.

As a child this was my favorite musical, and I went to many. I remember the Broadway show very well. The show was such a big part of growing up for me. I performed "Tomorrow" for 300 senior citizens when I was barely 4. I think I did the show at least 3 times, and remember all the lyrics to this day. It was emotional to hear her belting out the songs the first time, but taking her to the show I knew would step it up a notch. I took her in from our house in Queens on the subway to Times Square. The train stop practically ended right under the theater, so when we walked up the steps it was the first thing she saw. She asked if we were going and I said "Surprise!"

She sat through it all on the edge of the plastic booster they provided. There was only one point during the Hooverville song where she asked if I could fast forward it. I explained it was live theater, and she seemed engrossed enough that she didn't mind. At intermission she asked if it was the end of the movie. Again I explained the live theater part, she then expressed her excitement that it wasn't over. At one point as I watched her watch the show, I thought to myself, "She loves this, and I am glad that she is happy in the audience, unlike me who felt an overwhelming need to be in the show." I kid you not, two seconds later she turns to me and says, "Mommy, I want to be in the show, can I please?" So it begins!


At the end during the bows, I explained to her that we clap as a "thank you" to the actors who worked hard to give us a show. She clapped for every cast member and as "Annie" came out, I explained that if you really love what someone did you can give a standing ovation. I have never seen a little kid jump to her feet so quickly. She clapped with so much enthusiasm that I teared up watching her. It was a very happy night! 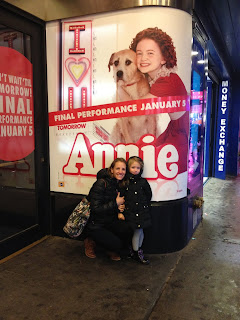 If you come into my house on any given afternoon, you might enter to the smell of muffins in the oven. The muffins will then go to the cooling rack before piling in a jar, before being distributed between snack plates, lunch bags, and out to friends. Today muffins, but tomorrow could be cupcakes or cookies. One might ask how I manage to find the time to bake while running after two small children, and the answer is this: it's a necessity.

This year I have had the pleasure of becoming new friends with another mom at Twig's school who shares the same hobby (the nice way of saying healthy addiction.) Together we have discovered why we love to bake. It allows us to have control over something creative in our lives. In the daily mix of early morning wake ups, school drop off and pick-ups, after school activities and little time left for me, I feel like this is an area where I can decide how I want something to look and what I want it to taste like and most times if I get the chemistry of it down the outcome is foolproof.

I recently heard someone say that outcomes are so important for adults but that small children (I am assuming under the age of 3 because my 5 your old wouldn't stand for unfinished business) don't need to complete things to feel they have accomplished a task. Well, I stand with my five year old on this. It bothers me when I can't check enough of my list off. I like the "end of an errand" feeling. When most days I don't dictate how much I get done, I know that at least what I do get done will taste pleasing, even to the most unappreciative group of young-ins.

After I finished writing this, I took a batch of muffins out of the oven. The only people eating them today will be me, along with my words. They were as bland as could be. I couldn't figure it out until I saw on the counter the measuring cup still filled with sugar. Perhaps, a little more focus would be handy when baking. Always room for improvement! 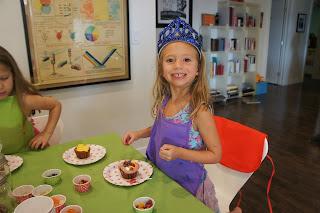