Celebrate Differences. That was said to me when I used to babysit for a family. The kids learned it at school because the kids came from different homes, liked different foods, and wore different clothes. Kids can be a bit too honest about their opinions so they learned to use the phrase to encourage kids to understand the concept of differences positively.

Kids can also be just plain mean. Now that I have a Kindergartner, I see how much an older kids' opinion means to her. When our neighbor, who is eight, has a friend over, Twig wants nothing more than to be in the mix. It isn't always appropriate or fair for an eight year old to have to play with a five year old, so at times it can get sticky. So it begins. I have tried to teach my daughter boundaries and to recognize when she needs space and when others around her need space. Everyone in this particular situation is sensitive to feelings and so we are all pretty respectful. School is a whole other situation though.  I somehow didn't anticipate other five year olds to be capable of hurting her feelings.

Right before the school year started, we took a trip to the East Coast. On one of the days there I met up with my friend Bridgett and her family. She has a daughter going into second grade and she told me how last year some of her daughter's friends made fun of her tuna sandwich because it smelled to them. Her daughter came home declaring she will never bring tuna with her to school again. Bridgett was so mad at these kids and wanted to remedy the situation so that her daughter would eat one of her favorite foods without shame but she didn't want to get involved. My heart sunk for her daughter and for mine because this kind of peer influence is in evadible.

In case I could avoid any unnecessary hurt feelings I gave my daughter a little chat about celebrating differences. I told her that not everyone knows this though, and so there might be someone who comments on what she brings to lunch. She loves peas and has been part of her daily lunches since I can remember. I have tried giving her other options but she requests them as her first choice. I can't really complain much about a kid asking for a green vegetable so it's a win win. I explained to her that some kids bring carrots and even though she doesn't like them, she would never comment about someone else's food. Apparently, not everyone gave this speech to their children. Sure enough, she makes a new friend. The friend sits next to her at lunch, comments on how she doesn't like peas. The next day makes a disgusted face about peas. The next day says, "Peas again?!"

Twig tells me that she asked her not say anything and explains that it hurts her feelings. I am proud of her, but it doesn't really work. The girl keeps acting shocked that Twig keeps bringing them. Finally last Thursday, she asks for seaweed in her lunch instead. I didn't ask why, and instead just asked more about her day. Eventually she told me the girl commented again. I explained that after you tell someone how you feel you then have to ignore them. I also said that she doesn't have to sit next to her, and that she could take this as an opportunity to make friend's with a new girl from class. She liked the idea and and with that I kissed her good night. I got to the door and she said "Mommy, I would like peas please!"

That day she reported back to me that she ignored the girl and pretended not to hear her. She said "Mommy, I did hear her but she didn't thinks I did." This went on for two more days at which point I emailed the teacher just to fill her in that maybe a blanket message about comments could be useful and she agreed. The next day Twig came home so happy to report that her "friend" didn't say anything. Maybe the teacher's speech had something to do with it, but I would like to think Twig handled it all very well on her own. 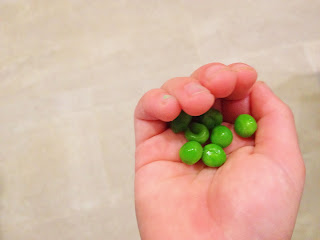 A Date With A Boy

There are many articles out there about spacing between children and what age difference is best for siblings. I had it in my head we would do three in a half years and well, you can plan all you want but things have a way of working out all right in the end. I have a friend who had kids fifteen months apart and then another who had them eight years a part. Everyone finds some of it extremely challenging and other elements of the gap to be easy. My children are three years and ten months apart and it has worked out pretty well so far.

This week I see the beauty in how my daughter being off at school allows me time alone with my boy. Last year she went to preschool and although I had that time with him it wasn't quite as relaxed. The first week she was in class I was busy running errands for her and the house. By Friday I realized he needed some fun just for him. I got in the car with a few ideas but no plan in particular. I started driving and thought of Travel Town. Twig loved it when she was his age so I had a feeling he would too. It was perfect. Not a huge place made it completely manageable for his age. There were trains to climb, a bunch of old cars, miniature trains, and a train he could ride around on.

He started walking in the last month so the feeling of freedom he had was so apparant on his smiling face. I knew he would have fun but I didn't really anticipate how much. The fact that he is boy seems to factor in so early. He was toddling around the whole place pointing to each train and saying "car." He isn't entirely wrong. He was jumping up and down in his seat on the train ride he was so excited. He got to run the length of every train inside and out. It was truly our first exciting mother/son date. I beamed watching him. I think we will be frequent passengers there from now on. All aboard! 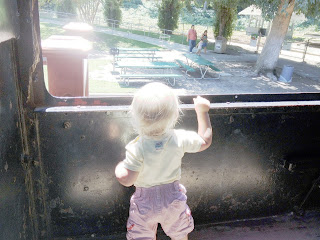