Today is the last day I will have a nine year old boy. As I reminded him of this before school this morning, we said that he would be entering double digits for a long long time. He responded with wise words.

“I hope I will be double digits and live long enough to be triple digits one day.”

I told him that was a good goal and with any luck and some good genes, he just might. I watch my child before my very eyes grow into this sensitive, beautiful boy. He has one toe in little boy and one toe towards tween. I love the rare occasions he still wants to snuggle in bed with me. I love his hugs, the way he puts his arms around me and moves his fingers in my hair, and his unsolicited kisses. The way he used to physically cling to me is gone, but in its place is one active, adventurous, fun-seeking kid.

Like many boys his age, he loves being silly, and often he doesn’t know when the right time to turn on the serious switch is. He gets carried away and doesn’t always pick up on the cues when not everyone around him thinks what he is doing is funny. He is overall a really good boy and is lacking a bit of maturity. What he isn’t lacking is a sense of fear that didn’t exist prior to the pandemic. He has separation anxiety, and if he is heading off to a new class or camp will be up the night before worrying about it for hours. He needs reassurance that he will be okay and safe when he gets there. I have promised him at times that he would be and I wasn’t exactly right. The past few years shifted everything as we knew it, so the way I thought things might work out didn’t always go as planned.

What I wish for him as he turns ten is that he taps into the reservoir of his bravery that he doesn’t even know he has yet. I hope that his bravery will be stronger than his fear. I hope that he can get beyond what scares him enough that he can reach his full potential. I see glimmers of it now in moments where he is able to turn on his focus despite whatever negativity he has lingering about. He has proven to be quite the athlete and I believe his confidence has grown from his accomplishments on the field, or in the skate park. I wish for him that he knows that he is smart, kind, sensitive, and sweet, and that at that I love him to the ends of the earth and back. I want him to know that we have his best interest at heart and that we have his back.

I once read that girls are difficult to raise and that boys are difficult to keep alive. This is relatable and makes me laugh. There are times when I am watching my kiddo drop down into a twelve-foot skate pool and skate around it at crazy speeds, or fly through the air as he lifts up off the top of a ramp. I watch these things thew the space between my fingers as my hand covers my face. It is hard to watch sometimes but he usually is fine. After all, we made it to ten, and he continues to soar! I can’t wait to see what is ahead for this sweet boy. 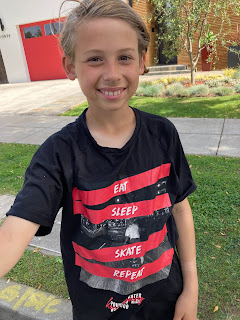