It’s a celebratory time of year. The time of year when the kids are mostly thrilled to be done with school and the parents are teary about the transitions ahead. I am going to need to book therapy sessions now in advance for four years from now when both my kids have a graduation ceremony at the same time. This year my daughter commenced her middle school experience and what an experience it was. She started out as a petite sixth grader all too aware of the size difference between her and her peers. She experienced the overwhelming fear of not knowing where her classes were, she was afraid of being trampled in the hallway and dealt with mean kids asking her if she was old enough to be in Middle School. It took a few months for her to get her footing, and get comfortable.

She made new friends and connected with her teachers. She got used to the layout of the school and learned where to find her classrooms. She still occasionally got made fun of for being small, but she took it in stride. She was finding her rhythm and even seemed to miss school when it shut down. She would not return for over a year later and by then everything in the world had changed. Isolation for a middle schooler was really tough socially. Very few kids knew how to keep up relationships through a lockdown. She saw one friend and as many middle school friendships ended, it just ran its course probably due to just too much pressure. Despite the challenges of virtual schooling, with the exception of the nine total short days she did get to go in person, if there was one year of Middle School to miss, seventh grade was it.

When eighth grade started she was all in. Knowing it was her last year she took advantage of all it had to offer. She took improv, played on the tennis team, was on student council, and did both the fall and spring theatre productions. She settled into a great group of friends who were both supportive and smart. They inspired each other by doing projects and helping each other study. There was an awards night and each friend as well as my girl, got an award for excellence. Two of her friends were even the valedictorians. It was a special night. The commencement ceremony was yesterday and it was fun watching all of these kids dressed in their best. There were definitely some awkward shoe situations for many of the girls. My daughter, included, looked uncomfortable trying to navigate in her ill-fitting first pair of heels.

As each name was called cheers rang from different parts of the bleachers. Everyone was happy to be together in celebration of all the kids. The student body president spoke about conquering Middle School and what lies ahead in High School. She warned that it would be hard, but that they all lived through hard already. I am sure the workload and responsibility will be a bit heavier, but I have faith that after she settles in, she will shine in High School, just as she did in Middle School. She has learned that life can be full of surprising challenges, but that it also can just be full. May her cup runneth over. 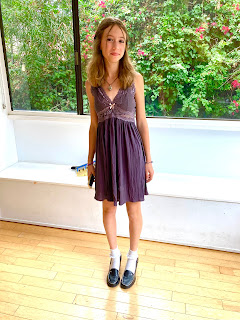