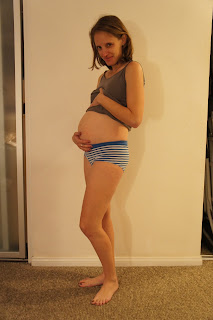 Pregnancy makes women crazy. That's what I hear people say all the time, and that's how any pregnant woman in a film or on television is portrayed. I don't feel crazy though.

Yes, I cry when watching something moving, or yesterday when my daughter said to my husband, "I made these cookies with mommy." I suddenly felt like I was doing a really great job as a mom. And I had to have a nicoise salad with a baguette the other day. Had to! I don't think these things are crazy though.

I have noticed some interesting feelings come up though. I get so irritated by certain people that, if anything, I should have more patience for. OPK, my husband calls them: Other People's Kids. I am usually so easygoing with all kids. Especially having been a teacher, I have a fair amount of tolerance, but lately I find myself often annoyed. Perhaps it's because I have barely enough in my reserve for my own child right now. My patience runs thin a lot lately. Besides OPKs (and just one or two, not everyone's), I also can't stand people in the grocery store who stand in front of you thinking about what to pick up off the shelf, knowing full well someone is waiting behind them. Today, I actually muttered, "Okay...",  slightly hoping that the lingering women in from of me would take it as her cue to DECIDE already. Oh, and people who walk into an elevator filled with people and feel the need to state the obvious and say, "Wow," as if she has never seen a full elevator car before.

There are other things that don't annoy me, but just make me laugh a bit longer than I should. My husband and I watched "Horrible Bosses" the other day, and there is a scene where the guys are sliding under a closing garage door. Two out of three make it, and then the third tried to slide under the nearly closed door. It's just good, old fashioned slapstick -- nothing new, but as I write this I am hysterically laughing and tears are rolling down my face. It was so funny, I swear. Also, after spending Christmas with her two boy cousins, Twig is convinced she wants a penis. She pees then stands up, puts her hand where her "penis" is, and shakes it off. This was more funny the first time, now she does it to sees if I will laugh again (now I am just there to smile and wash her hands). I was talking to my husband a few days ago and everything that we talked about suddenly seemed funny. Now in hindsight nothing in particular was that amusing. Now after reading some of this I can't really tell. I'm not crazy, just maybe a tad on the edge though.
Posted by Shea No comments:

So next week, Twig turns three and a half. By now I have established that two was a piece of cake. Three so far has been the most challenging since the newborn phase. Between whining, negotiations, tantrums and now night wakings, I am spent. I have seen reactions from myself that I never expected. Negotiations right back at her. Bribes and threats were things I saw other parents do, and hoped I could reason without having to resort to those. Alas, here I am, pulling out all the stops.

I have noticed when other people are here, a tiny little manipulator invades my kid's body. She knows I don't want to argue with her in front of people, so she gets away with more than I would like. Her beloved Baa (her stuffed sheep) usually only meant for her room makes his way downstairs. She becomes far more territorial about her house with other kids around. She brought her friend to tears the other day because she wouldn't get out of her swing and let her friend use it. I realize that a lot of this can be written off to her age, but for some things I know it's my lack of patience to deal with it.

The other thing I realized: we're self-conscious about disciplining her in front of others. We all do it differently so that by nature allows room for judgement. I have one friend who threatens her kids every few minutes, another who walks her kid right into her room, and another who follows parenting books to the T and comes up short when they don't work for her. I have no set system, but I know I go with reason first, and then after some time of that not working my inner mean comes out.

Yesterday my daughter's little friend had an angry eruption at her when she moved a toy while they were playing with it. It was a surprising burst of anger, frustration, and yelling. It sounded like her hair had been pulled but in reality she was just mad. Immediately, I saw the shock on my daughter's face and then the tears came. She was scared and caught off guard. We both went to our girls and dealt with them individually, but I felt a moment of "WTF do we do here?" I calmed mine down and explained to Twig that her friend was upset, and that she herself didn't do anything wrong, in the future we hope that she can tell us what she wants instead of yelling -- but for now, lets let it go. My friend was busy on the other side of the room trying to explain to her daughter that she can't talk to her friends that way. In the end it was all fine, as it always is, but in the moment I realized we are all a bit screwed. Every single one of us had to put out emotional fires all day long.

Lately, I have been reading Twig some new books. Amelia Bedelia, Curious George and The Peter Rabbit Series. All of them I read when I was young, but somehow I didn't remember what a mess all the characters get themselves into. Amelia Bedilia all but destroys people's homes and belongings, Curious George is basically breaking the law left and right, and in the Peter Rabbit books little animals are always narrowly escaping being murdered. Some of it goes over her head, but most requires a lot of explaining on my part. I have to tell her you really wouldn't do things like George, because he is just pretend, or Amelia Bedeila is just a silly lady who gets thing mixed up all the time, but in the end of these books it's as if an "I'm sorry" is a get out of jail card. Amelia Bedelia bakes desserts and when people eat them they instantly forget everything she has done wrong. George has crowds of people after him but when he accidentally saves the day, everyone forgets the damage he has done. The little nearly dead animals are mostly just good at outrunning the ones they have wronged. So my work is cut out for me. I have to teach her she can't misbehave and say or bake something nice to make up for it -- but oh is she laying on the sweet lately! 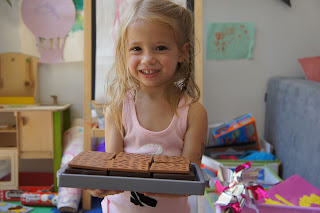