When I went to sleepaway camp as a kid it wasn't always a successful experience. I was extremely anxious. I lasted a week without eating. I couldn't sleep and I cried enough tears to fill the camp pool. Despite everyone trying to help me figure out how to navigate adjusting to camp life, I pleaded to be picked up. At the end of that torturous week for me, my parents came to get me. I immediately felt better but little did I know how detrimental it was to not master skills that could get me through future situations like this when they occurred, and they did occur.

That wasn’t my first camp experience and wasn’t my last either. As an athlete, my passion for my sport outweighed my fear of summer camp. When there was an opportunity to go to a sleepaway camp that also had two hours of skate time built into it, I decided to try again. Not only was my experience successful, but I also loved it. I loved the ability to start over at camp and get to know people who didn’t know me my whole life. I loved the freedom all of us felt being in a beautiful setting in New England. I love that there was both structure and an ability to choose certain activities throughout the day. I loved all the friends I met at camp and the memories that I made there.

With two kids who are camp age now, I had hoped they would get the opportunity to experience the positive aspects of camp as well. Both of them also have some anxiety, and I had hoped that might not interfere with them going to camp. My daughter went for three summers in a row to a one week camp. It was actually just from Monday to Friday, but it was a big hurdle for her when she went. She went with a friend and although she told me she cried on Tuesday night, her counselor helped her get through it, and she enjoyed the rest of the week. The second year she had a fun time, and the third year she went with a different friend and got a little panicky about the idea of not being able to reach us when she needed us. Despite that, she completed the week successfully.

Last summer when we discussed possible ideas, she said she didn’t want to go back. The decision was made for her when all camps closed due to the pandemic. After a year and a half home with us, she said she wasn’t comfortable going away this summer. She wanted to go but didn’t want to be somewhere where she couldn’t call or reach out if she needed us. I explained why camps do this, and that calling us could actually make it harder, but she decided she didn’t want to try. My nine year old on the other hand wanted to go to a sleepaway skateboarding camp. I wasn’t sure he was ready, but I looked into a way to make it work so that maybe I could work there while he attended. The camp was interested in involving me in some way, but their communication was flawed and I kept getting redirected from person to person without much success. Meanwhile my son was determined to attend this camp and even received a scholarship for skateboarding. He told me he didn’t want me to come because he wanted to do this on his own. I was proud of his bravery and wanted to support him.

He showed no sign of fear in the weeks leading up to camp. In fact, he showed nothing but excitement. He was counting down the days and couldn’t wait to get there. The morning we were to drive him up to camp, he said he had butterflies, but that he was still excited. My husband, my daughter, and I were all more nervous for him. I wondered how he would do and tried to prepare him as much as I could before we left to say our goodbyes. We were allowed to walk around the camp with him for over an hour before leaving, and he was thrilled to explore with us. When it was time to walk him back to his cabin, I expected to have him greeted by his counselors and swept into an activity, but that didn’t happen. Instead of counselors for the young kids, they have a few dads that stay in the cabin with them and supposedly look after them, but there apparently is no real training to coach these dads on how to help these kids adjust to camp.

“It's time for us to say goodbye now buddy. We love you so much.”

My kiddo’s eyes got wide and glossy.

I assured him it would be ok once he got busy and that the goodbye was the hardest part.

“What am I supposed to do now?” he asked.

That is where I started to feel uneasy. Where was the get-to-know-you activity, or the happy counselor to take him to a fun game so that he was distracted? I assured him that the fun would start soon. We got a call later that night from him. He borrowed a cell phone, which I thought was not allowed in camp, but at that moment I was so happy to hear from him that I didn't care.

“I’m a little bit scared. I don’t know that much people here.” He said.

Before I could respond he asked me if I wanted to speak to his new friend, and when I asked him what his name was, he said he forgot. It got us both laughing and he went on to tell me what he was excited about. The next day we got another call from him and he was having a blast. Tuesday afternoon when the phone rang from his new friend’s number I answered excitedly to hear from him, but instead of him telling me about his fun day, he was crying.

“Mama, can you come up here and just lie with me?” He asked

I tried to keep the conversation positive and get him to tell me what he did that day. While I desperately tried to help him, I also got so upset that he was sitting in his cabin, on a cell phone, with no one physically present to help him. I knew the worst thing he could be doing was sitting alone on the phone talking to us and crying, but I didn’t know how to help him. He was able to tell me some fun things he did and I was able to get him to go out with his friend to skate again. I hoped that would be the last call, and when he called that night he sounded a bit better. The next day though he called crying and asked to go home again. My husband and I called the office telling them to send someone to help him, and they did, but once he seemed happy they stopped. We toyed with getting in the car to get him, but there were many reasons why we didn’t. We wanted him to succeed. We hoped he could turn the experience around and have more good than bad. I sensed he was upset when he talked to us, but when he was skating and with his new friend, he was quite happy. He told us he won two competitions and was excited about his prizes. He asked us to put more money in his canteen account so he could buy more junk food. He was thrilled that he succeeded in landing a kickflip which was his skateboarding goal for the week. By Thursday though he called us, inconsolable. My husband and I tried to figure out what to do, and we called the camp office again and demanded they send someone to our son who was sitting alone in his cabin. It was the hardest day that we have had as parents. Harder than him having surgery. Harder than our daughter’s first week of middle school (although that comes in a pretty close second) and harder than the time we couldn’t find him that one time at the beach for a few minutes. It was harder because those were short lived moments before we could wrap our arms around our children and breathe a bit easier. I counted six phone calls home crying before a woman from the office went to him and helped. She also called and reassured us that he would be taken under her wing. It was a day (6 actually) and a dollar short, but I was relieved to hear he was in good hands. She is staying in touch with us and updating us on how he is doing and when she promised us she would keep an eye on him all day today, I hung up and cried. It has been a stressful few days, and I hope for his sake that he can have a great day today. We pick him up tomorrow morning and I cannot wait to squeeze his little unshowered body.

While this camp might be a skateboarder's dream come true if you are a teenager, it has been a bit of a nightmare for a nine year old. He has learned a lot, had a few great days and made new friends, but the camp has a lot to fix to make it work for younger kids. I have a lot of notes to share with the camp director, but I will wait until my boy is back in our arms before I press send. I don’t know if I will be able to get my kids to go to camp again, but I know that it can be magical when it works. I’m not giving up on the idea, but if I send them, I will likely be found vetting every single staff member before I leave them anywhere again. 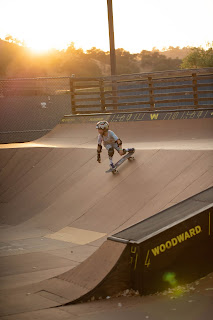 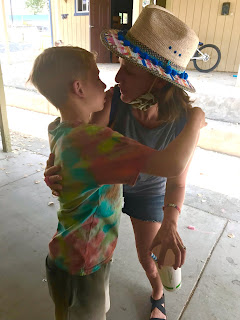