The past few weeks my living room was covered with clothes from my friend's niece who sends her stuff on to Twig. After hours of sorting and two trips to Target for storage containers, everything is finally a bit more organized. My next project will be to wash and sort all of the baby boy clothes I have been given, and put them away as well. I have no issue taking hand-me downs. In fact, mostly all of the clothes that both of my kids will wear are passed on. This week though I got two bags from someone and it made me take pause.  My husband's ex-wife.

There is a longer story here but for the purpose of this blog I will keep it simple. She is remarried and has a baby. He will be six months older than ours and so she very generously offered his clothes. She also offered to drive them here to my house, that she once bought with my husband and lived in very briefly. I know, AWKWARD!  I am working backwards here. She and I have become friendly. We actually used to be friends years ago, when she and my husband were still married and even after they divorced. Time passed and she and I grew apart. Then a few years later my husband and I reconnected from a mutual friend. We dated, we told her (thinking maybe she would be happy for us) -- she wasn't though. Time passed and my husband and I got married. I actually ran into her a few times but chose flight over fight and took off unnoticed. Then my husband and I ran into her. He said she was behind me and I thought he was joking. I turned around and there she was. Suddenly it wasn't so awkward anymore. She is married to a great guy, and over the course of some emails we decided the four of us to have dinner. I thought that would be the first and last reunion, but things happened.

After a few miscarriages she got pregnant, and after I miscarried, having lived through that sad time herself sent over a care package to us. It was sweet, thoughtful and touching. I was going to reach out but we ran into her again a week later. Note to anyone out there who might be in the same situation one day, try to avoid running into your husband's pregnant ex-wife right after you have miscarried. It just doesn't feel good.  After that another few months went by and when she had her son, I dropped off some food and a gift. Note again to anyone out there in the same sitch, try to not get there twenty minutes after the ex-wife gets home from the hospital with her in-laws. Also feels kind of funny. A few months after that though and we have gone for walks together, out to breakfast and last week out to see a play. It is nice. It doesn't feel like we are picking up where we left off and yet there are things we know about each other that do feel really comfortable. We have talked about the elephant in the room very carefully and everything that we thought might be really akward hasn't.

So yes I have taken this woman's hand me downs. The clothes, that is. She and my husband made their own decisions and ended up where they are today. The house that I live in now is ours. We decorated it, made it our home, and have our family here, with no pet elephant anymore. 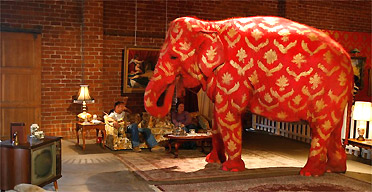