A few months back my close friend had us over one afternoon. It was like most afternoons in that we often are at each other's house. Our girls were playing in one room, and our babies were crawling around at our feet. We often spend afternoons chatting away while the kiddos play, we feed them together and then get them home for bed. This afternoon was different though. The normal talk turned serious right away. She said she had to talk to me. My first thought was, "What have I done?" and the second was, "Oh no, you aren't pregnant again are you?" The latter would only be phrased with such negativity for those who celebrate the end of pregnancy forever like she and I have. As big as either one of those who have been they are nothing compared to what she had to tell me.

Over three years ago I met my friend at a pizza place not to far from our homes. We sat with our husbands and daughters. The guys hit it off, our then toddler daughters were instant giggling buddies, and she and I began a friendship that has been one of the most important in my adult life. All of us are inseparable. They had moved from London two weeks before, and didn't know very many people with kids. I had been just that day saying to my husband that I wished I knew more people with kids near our house and then I met them. We spent days together at the park, pool, each other's houses, and nights and weekends we would go out from time to time as well.

We have experienced so much together. If you have followed my blog in the past there are many posts written about our experiences together. We have gone through potty training, tantrums, first day of camp, first day of school, feeling left out, isolating others, competitive behavior, annoying behavior. We have been there for each other as friends and as mothers. We have managed to raise two beautiful girls who love each other as much as we love each other. The more I meet other parents the more I realize how rare a find like this is. We have gone through pregnancy, miscarriage, and pregnancy again. We looked after each other's daughters when we had our baby boys.  We went through the rough newborn phase together. Our daughters played together while we cried on each other's shoulders about sleep deprivation, adjusting to managing two kids, and whether life as we knew it before was over.

As it got easier we grew even tighter. Our boys now had playmates and they seemed as excited to see each other as our girls. We had a great routine going with carpooling to and from preschool each day. We discussed the future and visited where the girls would attend Kindergarten. We agreed that as much as they loved each other that it would be best to separate them. This was the plan at least, until it all changed that afternoon. My friend looked at me and said "We are moving back." I was in shock. This was too much for me to even comprehend. This wasn't possible, and how can we change this. She had been so happy here, they all had loved living in LA. Then came the tears first from me, then her, then an even bigger wave of sadness came over me like a kick in my stomach: I thought of the girls. It was a very defining moment as a mother. When something this big can affect me this way I could feel how monumental it would be for Twig.

We decided to be honest with them straight away. It would have been too hard anyway to hide two grown women crying in the living room and pawn it off like nothing was wrong. We calmed ourselves enough to tell them and then prepared ourselves for the many questions to follow. It is now a few months later and the questions continue to roll in. The majority of them are about visiting each other though. They both have it all planned out, and we know they will see each other at Christmas time when they come back for a visit. That gives us a bit of time to start planning a visit to London. In no way, shape or form is this how any of us saw it all panning out, but there is clarity in one thing for sure, these girls have a bond for life. As their mothers we have a commitment to nurture that bond and although they are leaving, the friendship between us all isn't going anywhere. 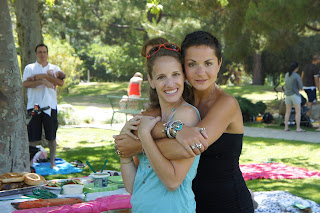 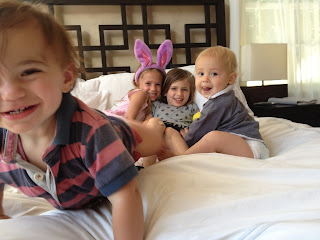