I take my boy swimming twice a week at the Y. This is the single activity that he does right now that is not shared with his sister. He has made his own friends from this class and has learned to be with his peers as well as to swim. He has three close friends there, but recently one hasn't been lateley. My son kept asking for his friend and I meant to reach out to his babysitter but before I could I got a message from the babysitter to call her and that she had something important to discuss.

This boy's family has chosen a great woman to care for their kids. She is strong, loving and respects the family a lot -- and it shows. When I picked up the phone to call her back I couldn't imagine what was so important and had hoped that they were still working together. The couple, in addition to the two and half year old, had a new baby. I thought perhaps it got too much for the sitter to care for them both while at the gym. I was making up all sorts of possible scenarios, but nothing prepared me for what she told me. This little sweet boy has cancer. He was completely symptom free until they found some bumps around his thoracic region. They took him in and found his kidney to be completely covered by tumors.

As I sat on the phone listening to this woman tell me how strong and brave the little boy had been, I lost my breath and my tears blurred my eyes. How and why should this happen to someone so young? Someone so full of life, and so little time to have experienced it. This child was jumping into the pool and laughing with my boy just weeks before and now is stuck in a hospital bed. It isn't fair. It is human nature to look for answers when something terrible happens. I thought back to a child I know of who has Leukemia and that in his particular case he may have gotten it from an X-ray being done when he had another infection in his body. The radiation caused the cells to multiply. I immediately wondered if something happened to this little boy that could have caused his cancer, but there wasn't. Cancer is random and doesn't always have a reason for showing up. This just doesn't make sense to me. You can be the healthiest person or the smallest most innocent person, and still get the most fierce of illnesses.

The family has asked that everyone say a prayer for this little boy and wish him the healthiest of recoveries. He had one kidney successfully removed two weeks ago but it seems that the cancer has spread to his lungs as well. He has a break now from the poking and prodding at the hosptial and will be home for a bit before starting chemotherapy. This boy's smile is thawing to the sadness that accompanies his story. I pray that his spirit carries his body as gently as possible to what lies ahead.

Please see attached link if you would like to help Jack's family. 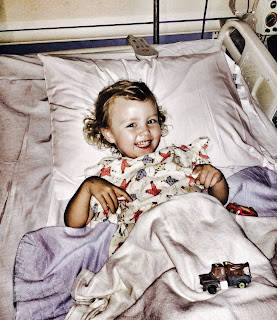