My mother was a concert pianist. She went to Performing Arts High School, Manhattan School of Music, studied with the best of the best teachers and was even a soloist at Carnegie Hall. Suffice to say, she knows a thing or two about playing the piano. When I was a little girl, it was a given that I would take music lessons. Wanting to follow my sister's footsteps, I took violin first. My brother played the French-horn and eventually my mother started me in piano lessons. She was smart enough to know that teaching me herself wasn't wise, but what she didn't expect was that she would have listen to me practice and not chime in. She couldn't help herself and after a short time, I was done with piano lessons.

That wasn't the end of music in the house at all. My sister continued violin and went on to be in a chamber orchestra, my brother continued French-horn, and every afternoon my mother taught piano lessons in our living room. Her students were made up of friends, neighbors, and a few non-english speaking music prodigies. Somehow the language of music could be taught with out words, and it filled the house from the moment I got home from school each day. While I had snack after school, there was a lesson. While I did my homework, a lesson. While my dad cooked dinner, another lesson. I was accustomed to whispering in my own house, and I didn't like it. Sure my exposure to Bach, Mozart and Beethoven were more than the average kid my age, but I began to resent the piano.

My form of "rebellion" was to take up a sport. I began figure skating and I fell in love. I was a rink-rat; I was happier at the rink than anywhere else. I loved all that skating was. Something I could do that was just mine. I loved the speed that I could move when gliding on the ice. I loved landing jumps, skating clothes, putting together routines with my coach, I loved my coach, I loved spinning, and I loved that I found something I was good at. My confidence grew and at the end of the first year of lessons, I was heading to my first competition.

I was no stranger to performing. In fact, I loved that too. I had always loved to act, and sing. I had done theatre, and had been part of productions with large audiences. I wasn't afraid of a crowd. Performing was always part of the practice, and I knew that from watching my mom with her students. She would always hold a recital once or twice a year in our living room. I would sit on the couch or the floor with all the other students and listen while they went up one by one to play their pieces. If they messed up I never noticed, and if they were nervous I never noticed that either. I just remember a series of well played pieces that I heard over and over again in my home, but this time with out any breaks in between. When all of the students were done playing my mother always served cookies and juice. It was usually Pepperidge Farms Milano cookies, which would never make an appearance in our house except for piano recitals.

When I performed, my adrenaline would kick in and I felt my energy lift, and I enjoyed every minute. When I took to the ice for my first skating competition I expected the same feeling, but it didn't come. In it's place were nerves. My legs felt shakey, I felt distracted by the newness of the rink I was skating on for the first time. My music began to play and I felt like my body was skating without me. My mind was trying to keep up, and my heart was off doing it's own thing entirely. I made it through the program, but it wasn't fun. I didn't fall that first time, but it wasn't graceful. When the marks came out I was tenth place out of twelve. When I reunited with my heart it felt broken.

Performing and competing were not at all the same for me. Skating is also not a forgiving sport. Unlike acting, when you mess up a word you can fix it without anyone noticing, when you fall not only does everyone see, you also get judged for it.  In all my skating I only won one gold metal, a handful of silvers and bronzes but more often than not I didn't stand on the podium.  Competing wasn't my favorite part of the sport, but I did the best I could. The lessons form losing, and the confidence from trying were worth every minute.

My daughter started piano lesson almost a year ago. Like my mother, my husband is also a piano player. I warned him ahead of time that we need to keep our hands off the piano while she is practicing unless she asks for help. So far, she is loving it, and we are both proud of how much she has learned. Saturday, she had her first piano recital. She had two pieces to preform and she had been practicing them for the last couple of months. There were almost thirty students playing, and she was at the end of the first half. All through the players before her, she reminded me she didn't need me to come up, she wasn't going to bow, and she rejected any advice I had. She was a little nervous, but she walked up to the piano with confidence. She played her first piece just how she had practiced it. The second was going smoothly until the very end when the notes just didn't come out right. She stumbled for a few seconds and then fixed her mistake and ended the piece. She stepped away from the piano and her face was red. She held it together until she sat down. She was about to cry but was able to turn it around. I pointed out to her how many students were making mistakes, and that nerves play a big factor. I explained how everyone was in together and that was okay to make mistakes.

After the recital she was relieved to be done, but also proud of herself for getting up in from top everyone and playing. Refreshments were served afterwards, and just like after piano recitals at my house, there were cookies and juice. There must be a note in the piano teachers handbook about cookies and juice. That one time in my skating that I won a gold medal, my parents took me home and regretfully explained they had plans that night and couldn't cancel. To this day my mother is upset with herself, that she didn't get to celebrate with me that day. At the time it didn't upset me. I was so happy I think I stared at that medal all night, but seeing it from a mother's perspective, I can see how she felt bad. I thought of that Saturday after the show. We had plans to go to someone's house together as a family, but it wasn't related to celebrating her. I'm not sure if trying to overcompensate would have been the right thing, or if going on about business and reminding her through the night how proud I was of her was enough. Just like everything else in parenting, we figure it out as we go, and when we mess up we do our best to fix it and try to finish off on a good note 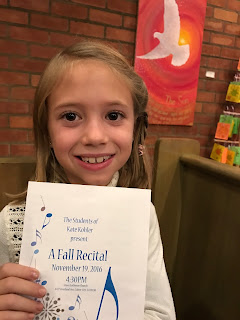