There is that fine line between laughing and crying when you are being tickled. It starts out being funny and you play along, but then it starts to hurt. If you are being pinned down, you start to panic for fear of losing control. I have found myself in this situation a few times, and when you say "stop" people have a hard time listening because you are laughing. With all the news out there about sexual harassment this week, I keep thinking about this fine line. I wonder when the "stop" will be loud enough for everyone to hear.

I got a Facebook message yesterday from a friend who I haven't talked to in a long time. She said that all this news about entertainment executives using their power to manipulate women has had her thinking of all of the men who abused their power with her. She brought up a certain TV producer who we both knew and asked if I thought of how he used to promise us to advance our careers. He was sleazy and blurred the line of professional and personal. We were desperate to work as actors though and he could make that happen. So we played along, until we didn't want to play anymore.

I look back at that time and get a sick feeling. In my teens I felt slightly immature compared to my peers who some of which were already sexually active. I was so focused on skating, school, as well as on  a kids theatre group I was in. I had a few guys I took interest in, but I was fine keeping it at a safe distance from what was really important to me. When I was sixteen and part of this theatre group, a twenty three year old employee took a bit of extra interest in me. We hung out a few times and it didn't end well for either of us. Power was really thrown around in this situation, and at the end of it all I felt like I found some within myself and went on to use it to get me in a bit of trouble with older men. A line was crossed that I didn't know was cross able, so I kept crossing it over and over again. I never really had power, just the ability to invite the wrong behavior from adult men, and it became a pattern of mine for a while. A pattern that took a lot of time to break.

When I finally realized there was a certain type of attention I didn't want from men, it seemed they didn't always get the message. As I got older and more confident, I was able to say "no, thank you" louder than I ever had, but it wasn't always loud enough. Sometimes, you need to scream it to be heard, and sometimes when you need to scream the most no sound seems to come out at all. I keep seeing the posts on Facebook saying"Me Too" and I haven't really wanted to post. Mostly because I don't think it's the women who should have to speaking up now. I want to hear from more men apologizing, more men, saying they understand consent, more men, saying they know what is right and wrong, and more men saying they will listen and respect boundaries.

My husband teaches our daughter to not be afraid of hurting someone when she feels she is in danger. He wants her to take a self-defense class, and knows to aim for where it hurts. As a woman who has been in danger a few times the fear of not being able to defend yourself physically is real. Regardless of feminist supe hero motivation that I may have, I am still smaller and weaker than the average man. I also, think of how violence often just invites more violence. I am not sure what tools to give her for physical confrontation, but I will make up for it in the emotional department. Sadly, it doesn't seem like the question is if she will be in an uncomfortable situation one day, but more when she is, how will she handle it.

As I was walking, all of this ran through my head this morning.  I was crossing the bike path that leads back to my car when a biker swerved right near me. As I looked up to meet his eye, he rode closer to me, looked at my eyes and then looked me up and down. He pursed is lips and made a kissing sound as he rode away. It just seemed like if there was any point in time that this kind of behavior would have stopped it would be now, but it hasn't. This isn't something I encounter much anymore. I am rarely alone, and the people I am normally with are children so it seems I am spared. There are many things I don't do by myself for fear of being hassled. I don't think there will be a point in time where women have to stop being concerned that they are at risk. I just hope that my daughter is stronger than I was, and can outsmart a man without getting hurt in the process. 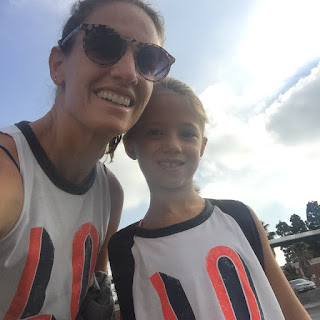