As summer comes to a close (sob) I am soaking in my two kiddos before they start school.  This calm before the school storm is both my best and worst time of year. I don't like thinking about the first day of school. It still brings up the anxiety that I had when I was a kid. New teachers, new rules, responsibility, and routine. Every new school year felt like a threat to my personal freedom. My kids do not feel the same way I did, so I put on a good face for them. When their normal nerves pop up for them, it kind of sends me on high alert. It pains me to see them afraid, uncomfortable, or daunted by school. They handle such issues with much more grace than I ever did. I also love this time of year because we get to play just a bit longer. We take a few beach days, go to the movies, swim and leave the house when we want in the morning.

With more time spent together each day, I get to see every little change as they happen. Both kids are learning and changing so much and in such different ways too. Both my kids are very social so it is fun to watch them get excited about hanging out with their friends. It is also fun to watch the difference between what they both like to do. My son has a friend over and they go outside ride bikes or skateboard. They play with toys in his room and then they ask for snacks. My daughter either wants to write a story with her friends, or make a new iMovie, they like to walk around the area on their own, asserting a fairly new sense of independence.

At six my boy is definitely not quite as cuddly as he used to be. It seems I have to ask for a hug or kisses, when they used to come without prompting. When he does come in for a snuggle now I hold on as long as I can. He called out to me in the middle of the night recently, and by the third time, I asked him what was going on, and he replied"I just missded you." My exhaustion just melted away, as I was smitten by him all over again. My friend calls him Dennis The Menace. Originally because he looked like him, but now also because he pretty much is him. He is sneaky all the time, and when he gets caught he says"I didn't know." He does this  so well, its hard to argue with him, but argue we do.
He walks around referring to my husband as "bro-sky"and calls me "mamasita." He likes rap, at least the kid versions I let him hear. Recently a song came on and he told us we needed to change the song because he heard the f word and that it is inappropriate. Glad he has standards. He also shared his BIG NEWS announcement with us recently that he has his first wiggly tooth. He felt so relieved to no longer be the last friend he knew to have a wiggly tooth. Just like his sister, an adult tooth has poked up behind before the baby one is out. He now reads books to me, and although it requires a lot of patience, I treasure this time each day. He is a new first grader with two days under his belt, and I am so proud of him.

My daughter is ten, and is mostly lovely to be around. She can be sassy sometimes, and it is not something I was prepared for, but I am determined to figure out a response immediately. If she draws a line in the sand with an titanium pole when it's something she wants, or doesn't want, she is pretty weighed down and hard to move. Other than that and some normal sibling bickering, she is like a 35 year old in a ten year old body. She doesn't miss a beat on any conversation around her. She is sensitive and thoughtful. She is so bright and her insightfulness blows me away.

She is also into skateboarding right now. She plays the piano and I love hearing her practice, especially since she is playing some new songs now. She continues to love books, and our favorite thing to do before bed is lie reading our own books side by side. We have a mother daughter book club, and she loves planning the menus and activities with me. She just started her last year of elementary as a fifth grader and Oh the places she will go.

So soon enough we will be back in the swing of it all. We had to have a sugar and screen time detox before the first day. Both kiddos have a sweet tooth like me so we had to indulge in a few more ice cream cones before school started. We took in a few more adventures, a bit of sunshine and as many snuggles as they would let me squeeze in. 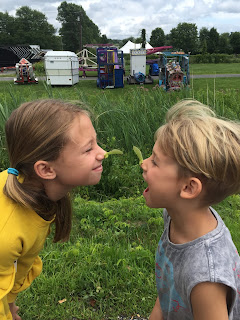