Saturday, I took the day off. It wasn't intentional. I had a plan with some friends in the morning, and then another plan to meet a friend for an early dinner. My husband took the kids out for the morning, and when I got back home they were still out. I took a nice long shower, and they were still out. My friend asked me if I could move our plans a bit earlier so I got ready to leave just as my husband and kids pulled into the garage. I said hello and goodbye to my husband and daughter, and kissed my boy's sleeping head as he napped in the car. By the time I got back, it was nearly their bedtime. I highly recommend a day off like this once in a while.

I met with a friend that I haven't seen in quite some time. He lives on the other side of town, and in LA that may as well mean the other side of the country. I moved out here at the same time as he did twenty (gulp!) years ago. I drove out with his college friend, and after a few months, she returned to NY, and he and I stayed. We both were young when we made the move, we didn't know quite who we were yet, even though we thought we did. We have both come a long way since those days, and we have seen each other through a lot. There were also times we were not in each other's lives. We had more than one falling out. No blow-out fights or rage-fueled spewing at each other, but we had our disagreements that resulted in breaks in our communication. Two were differences in opinions, and one was just life taking us in such different directions. The last break was shortly after my son was born. We went over five years without seeing each other. When I ran into him, I had two kids standing next to me, and it was surreal to introduce them to him. We were standing in front of someone who I shared so much of my life with, and here are two of the most important people in my world, and they had no idea about each other.

We spent three hours catching up Saturday. We had long, intellectual, spiritual, and funny conversations. We somewhat jokingly made a list of topics to cover, and we actually succeeded in covering them all. For most people who know me, they know this is nearly impossible for me. 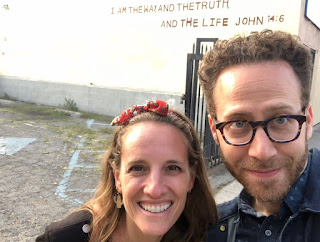