On my last solo hike that I took, I heard a girl screaming. I was already at the top of the mountain, and began to stretch, when I heard a very panicked cry for help. I was surrounded by other people, who were stretching as well, or talking to friends, but no one was reacting to the cries. At first, I thought well if no one else is alarmed, maybe I shouldn't either, but then I thought, what if no one is helping this person? I looked around to see where it was coming from, and located the sound from the behind the bushes. There was a hedge and then a concrete platform, and so I walked over to the other side of the hedge so I could see who was crying. When I got there, I found a woman in her twenties standing up and screaming in fear. I looked to see who was with her, and down at the bottom of the lane from her was a man. I asked him if she needed some help, he smiled, said thank you, but that she was just afraid of those two. Then I looked where he pointed to, and between him and her, halfway up the path were two sweet cottontail rabbits.

This was a pretty humorous sight. The girl was a larger girl, and the rabbits were so little and innocently minding their own business. The man with her smiled as he tried to calm her down, and tried to reassure her that they would not hurt her. He encouraged her to just walk around them, but she was petrified. I saw him walk up to her, and then she begged him to please hold her hand and stay between her and the rabbits to get her down. I suddenly didn't think the situation was funny anymore. In that moment I realized that fear is fear, no matter what brings it on, it is horrible. For that woman, those rabbits caused her to freeze in terror.

The other night, my husband and I were at a party. My husband started to talk to someone he only met once before briefly. Perhaps the man was a bit intoxicated, but in what seemed like a normal banter between two new acquaintances, moved to a very uncomfortable cross examination, about what in life my husband fears the most. It went from my husband saying he hadn't traveled somewhere to be questioned about what was holding him back. There is a time and a place for this kind of conversation, and of course a level of trust before people can talk freely about the subject, but this party wasn't it. It did start my head going on the subject though, and Roosevelt's quote, "Only thing we have to fear is fear itself" started ringing true for me again.

There are so many times that I feel fear, without even being sure of why I am afraid. For me, this physical feeling proves that anxiety is chemical at times. Sure, there are real life situations that cause me fear, but a lot of times, it just creeps in there uninvited. It is interesting what fears people have that are socially acceptable, and which ones aren't. I have two friends who will not go skiing with their families because they are afraid of heights. I have another friend who is afraid of flying. They can get through life and they never have to face their fears if they don't want to. After my car accident, I was afraid to drive again. Terrified, but I had to pick my kids up from school, and it would have affected my day to day and everyone around me if I didn't get over my fear.

Walking down the hill on my hike that day, I could not get that girl's panicked face out of my mind. Even if everyone around her thought her fear was irrational, her fear was still so raw, and so raw to her. I could feel it, and wished I could hug her and reassure her that Peter Rabbit and his bunny friend would not hurt her. She would not be comforted though, because fear is a fast burning fire, and once it ignites in you, it can be very hard to smother. For those out there who haven't felt it at it's most aggressive, please be kind. What you fear the most in life is not light party chatter. Also, rabbits can spread rabies and their teeth do look kind of scary. 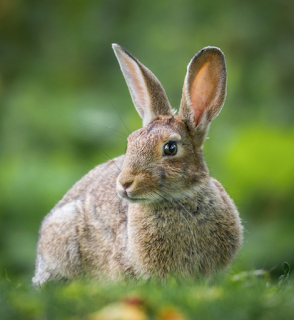 Photo by Michael Roubos on Unsplash