The jump from elementary school to middle school is seemingly bigger than I anticipated, and believe me, I anticipated. First off, it is so much larger in size than elementary school, like more than three times the size. Secondly, the expectation that the kids handle responsibility themselves is much bigger than it has been up to now. It is called middle school, which implies that it is in between elementary and high school, except it so far resembles high school much more than elementary. From the first day at drop off, it was apparent that a parent is no longer welcome to walk their kid into school, which I completely get, but it still felt jarring and abrupt. At pick up, there were still so many other kids around that there was no reunion hug, but rather a cool nod hello.

More than anything else, my daughter cares about what her peers are doing. She will have no part of any activity that doesn't involve a friend. She cares so much about this that it dictates her decisions about things she loves, and causes her to forgo doing those things if a friend isn't with her. She cares more about what other people think than she did a week ago. She suddenly has an interest in certain types of clothing, not because she likes it, but because so many people are wearing that kind of shirt at school this week. I understand that peers play a huge roll at this age and I know this is a completely natural phase, but I want to make sure her own opinions about herself and who she is, don't get tarnished along the way.

This is quite possibly the most uncomfortable age physically and emotionally. Hormones and body changes are not fun. Feelings are bigger than they used to be, yet the expectation to play it cool and be chill are also bigger. Drama is bigger too. Whether it is a bug bite or confusing homework assignment, the reaction is catastrophic. I made the mistake of trying to lighten the moment the other day and instantly made it worse. I am trying to be patient and kind, but sometimes it is challenging for me to abstain from saying what she is going through isn't that big of a deal. I need to remember that it feels big for her and that being neutral and calm will help shrink the size of the problem sooner.

She seems to be pulling away from me more and more, on a daily basis. After school, she walks with friends while they all wait for their younger siblings to get out of elementary school, and they hang, buy blended drinks at the little cafe on the corner, and play on their phones, that a few of them have. I want to give her a bit of rope, but I am unsure just how much to give.  I am of course concerned about the content they are looking at on the phones, and I wonder when I see them taking photos of each other where those photos will end up.  I am also feeling such a loss of influence, when I see her buying junky after school snacks so she can eat the same things as her friends. I’m hoping that a healthier afternoon plan will begin when the school library is open for them to do homework in, but for now, I am giving her rope quite a bit of slack, while fighting my own urge to grab on tighter.

There are two very different kids I’m getting to know these days. One is the kid who gets worked up about what to wear to school, when she’ll get her own phone, and doesn't hold my hand as much. The other is the child who is

still a child, runs back to me in the morning before drop off to get one more kiss before anyone sees, or cries to me at night because she misses her old school, and still crawls into my arms asking me to cuddle her. We both have our feet in two different worlds right now and that feels pretty unstable. Middle School is called Middle School for a reason, but I hope and pray that getting her footing doesn't take all three years. I know the kid I sent off to the first day is still in there, but I miss her already. 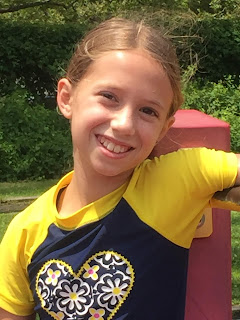