My sister in law does a mean impersonation of a monkey. It's loud, funny and is incredibly authentic. When my daughter was two or three, she was so entertained by it. Eventually she was imitating her Aunt and making some impressive monkey sounds herself. One night we were leaving a restaurant and our daughter started making her monkey sounds. We had her do it again so we could video to send to her Aunt. She did it once and then we asked her to do one more. She started and mid-monkey — she stopped, looked around and said "I don't want to do it again, because then the people on the street will say 'why is that little girl making monkey sounds.’ That was the first time we recognized her awareness to what others think of her.

When I was little, my mother, a pianist, had me do recitals with her. I had a pretty big voice for a little kid and I loved singing. We performed once for my grandmother's senior center and someone made me a gown to wear. I walked out onto the stage, my mother played the first few notes and I began to sing. As soon as I did, the audience began to laugh. I was only three, but I knew then that I did not like that they were laughing at me. My mother later explained that they laughed because I was so little, and that they were laughing because they were happy. I felt like unless I was making a joke, it didn't feel good to be laughed at.

We all want our children to be those confident kids who don't care what anyone thinks of them, but most kids really do care how others perceive them. I think my two kids care a bit more than they should sometimes. There are times that their concern with how they look or what their will friends say matters too much and can get in the way of them getting out the door in the morning. If something doesn't look or feel just right to my son, he gets really upset. He is more opinionated on fashion than I think a seven year old should be. Both kids are very particular about their clothes and shoes. It can feel impossible at times to find them clothes they will actually like and wear. Suddenly, I have a new found respect for schools with a uniform policy in place. If only I could buy my kids two outfits, and those were their only choices each day.

The seemingly impossible notion of balance keeps popping up. I am honestly not sure that balance is attainable, but I keep trying for it anyway. My goal as a parent is to acknowledge my kid's feelings when insecurities show up, while encouraging them to be who they are and own their choices. This has not yet been fully successful and my kids see through my plans most of the time, but never the less she persisted. I don't give up that easily. If I can get my daughter through her teens years with even a trace amount of self esteem left, we will have accomplished something major. I am hoping for more than just an ounce of confidence, but it's a jungle out there. 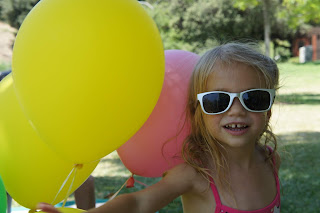