In my early twenties I moved out here to Los Angeles. I found what I thought to be an amazing housing situation with two roommates on the bottom floor of a beautiful Spanish duplex. I found out about it from the woman who was moving out. That alone should have tipped me off, but the rent was so inexpensive and the place so nice, I couldn't see beyond those details. The two women I moved in with had zero social skills and rarely came out of their rooms. When they did though, our interactions were always so uncomfortable. I ended up staying there way longer than I should have and began planning to move out when things went from weird to worse.

There were some bizarre things going on in that house.  It was hard enough having to share a kitchen and bathroom with these two, but when they brought home men it got even stranger. There was a very nice elderly man who lived next door with his quiet wife. He was friendly and would always say hello in the front of the house. One day he came in to spend time with one of my roommates and not long after, he was frequently staying over. I believe he was in his eighties and if I am not mistaken my roommate was under thirty. It is not my place to judge, but it was time for me to go. I gave my notice and my move out date was December first. The series of events that happened in that last month were so odd that I wrote a play to help me countdown the days. Performing and hearing people laugh about it, was imperative to me to be able to make it to move out day. The play was called "December 1st."

It took me another few apartments and another roommate situation to learn I really just wanted to live alone. I found a great bungalow and lived there for a few years until moving in with my now husband. I loved my apartment and was so happy to have my own space.When we decided to get married, we were looking for a date in November. We had our hearts set on a certain venue and the first available date that worked for all of us was December 1st. We took it and began planning our wedding. It wasn't until I made up save the date cards that I realized that the date was familiar. It made me happy to know how far I had come away from that period of time in my life. So much so that it took me so long to remember the date had any significance to me in the past.

Our wedding date arrived on a crisp cool day. We gathered with friends and family to share our commitment to love one another. We welcomed our daughter within the year and a few years following we had our son. Two years ago we celebrated our ten year anniversary by renewing our vows with our children. Our life is full and every year is a gift. We just celebrated our twelfth anniversary! This year has had many challenges which we handled with the kind of partnership I thought might not actually exist in real life, but I'm glad I was wrong. I got a good one and I am looking forward to many more years with him. Which is in some ways surprising because I swore off ever having another roommate and now I have three. He was worth taking another chance on, but I do wish he wouldn't leave his socks everywhere. Our daughter does it too, so it must be genetic. 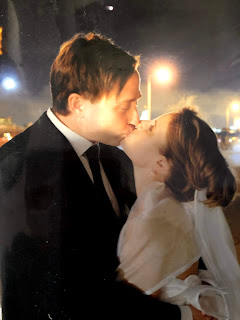