It’s a pretty accurate saying  “you don’t know what you’ve got till it’s gone.” The last wild ride of a year has taught me that. I didn’t realize how much I valued school for my children until it was taken away. I missed all my friends when I wasn’t allowed to actually see them. I longed for the freedom to travel when we were no longer able to fly. While I was proud of myself for staying pretty positive through the twists and turns of this nightmare situation, I am beginning to see the ramification of all we have lost.

Resentment is a useless emotion, yet it is what I feel towards some of the side effects of pandemic living. I am bitter about how much time was lost. I am sad that it has been over a year since I have seen my parents. They are already old so having one less year with them when time with them is already so precious makes me quite regretful. From the scant times that I was able to see them on a video call or zoom, I could see subtle changes in them, but it was difficult to really see how they were doing from so far away.

My daughter who had a hard enough time adjusting to middle school finally got used to it when the doors closed at the school for more than a year. For her, going back after so long was like starting all over again socially. Already at such a challenging age socially these kids were forced into an unhealthy amount of alone time going from class to class in the solitude of their bedrooms to stare at teachers and students on a screen, most of which they hadn’t ever met.

My son at eight wasn’t so affected socially, but the love he had for learning came to a screeching halt. The relationship we had from the moment he was born as mother and son had to be tweaked to teacher and student at times. That shift was neither smooth or welcomed. We lost our patience with one another often resulting in tears for one or both of us. The strain on our relationship was palpable. He deserved independence and privacy during his school days but it was impossible for him not to be witnessed by me because we were in such close proximity to each other. We came up with new strategies, new plans and made pacts with each other that we wouldn’t lose our cool with each other. We took deep breaths, tried to explain when something was frustrating without directing our frustration at each other. I tried to remind him as well as myself that it was okay to be angry, but it was not okay to be mean.

After a few months of trying to dance between teacher and mom, I could see the toll it took on us. By the end of the day, we were tired of each other. This little boy who used to come to me and plant unsolicited kisses on my cheek would often walk right by. I organized a small PE class for the kids who lived here in our complex. The twelve other kids could hardly wait to have an opportunity to have a structured social activity, but because I led it, my son wasn’t as enthusiastic as the other kids. He too wanted time without a parent that allowed him some outdoor, physical activity with friends, but even there I was by his side. The occasional get-togethers with friends made such a difference but not always easy to organize.

My kiddo had always loved skateboarding but things changed one day when I took him to the skate park to meet a friend who was visiting for a few days before moving to New Zealand. His friend had invited another friend too and the three of them hit it off. The father of that new friend reached out a few days later to see if my son wanted to skate and that was the beginning of a skating obsession. The two boys became close friends with a small group of other boys around their age and that little crew was inseparable. They could skate for hours on end together. I met all the parents while sitting at the skatepark. We all exchanged texts and a day hardly goes by where they aren’t meeting to skate. Any apprehensions I had about this sport, and I do have them, are outweighed by the positives. While the risk of injury is real, and even with helmets each boy has had a scare or two, they all wear every possible protective layer before getting on that board. The culture of some skate parks that I have seen was enough to have me researching little league, but I was proven wrong over and over by the amount of support other skaters give each other. I have witnessed some foul-mouthed teenagers that were pretty oblivious to younger kids skating around them, but there were far more serious skaters who didn’t miss an opportunity to encourage the younger kids when they nailed a new move.

Skateboarding was the best thing to happen to my son this year. He has made friends, gotten outside, and has been incredibly active. I may have to drive him and sit outside the park, but luckily for him, I can’t even enter past the gate. I don’t have a skateboard, know how to skateboard, or have a real desire to learn so his need to spread his wings to fly away from me has been met by a board, trucks, and four wheels. As soon as we get to that park he steps on and takes flight.

With the world slowly opening up, a lot of the pressure on the two of us had been alleviated. We still spend a lot of time together and I don’t get as many cuddles from him as I would like, but we have mostly closed the teacher-student relationship and are building back up being mother and son. He is more talkative with me. His mood is lighter and more playful. Lately, he will occasionally sit on my lap just to be near me which makes me want to stick my face in his neck to inhale him in, but most of the time I resist that temptation and take his lead. I haven’t had an unsolicited kiss on the cheek in a while, but I have noticed that through all of this, he has never stopped reaching for my hand when we are walking together. I will never stop noticing that and will deeply treasure it while I still have it. 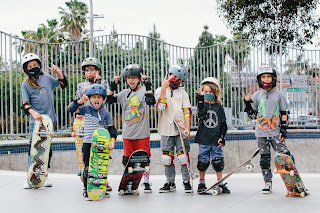