When my daughter started Kindergarten she cried and clung to me on the first day of school. The teacher’s aide had to take her from my arms as I ran out so no one could see me crying. The next day she wrote a note to us saying, “I’m not goin to school” and then clung to the couch when it was time to go. Other than the missing “g” she had written her note so well that I thought maybe she didn’t even need to go to Kindergarten. We kept taking her back and in those first few weeks, the drop offs didn’t get any easier. The teacher let me know she was okay once she settled in for the day, but saying goodbye each day was brutal. In the second week of school, a mom who had been watching me suffer each morning told me something that I keep reminding myself of lately. She explained that she was a teacher before she had her own kids and she always noticed that each year for some kids, it would take until Halloween for them to settle into the school year. She said there was something about Halloween that helped bring the kids together as a class and she hoped that would be the case for my daughter as well.

She was right and by November my daughter stopped crying at drop off. She started again after every vacation, even after Spring Break with only weeks left to the school year, but she eventually got comfortable at school. Every year since has included some tears, fears, and in most cases both for both of my children when it is time to go back to school. This is hard to watch as a parent, but not unexpected since I also struggled every year to settle into school. At around third grade, my daughter stopped crying on the first day of school, but she is yet to eat anything for breakfast on those first few days due to nerves. In sixth grade, at the beginning of middle school, she had an especially difficult transition. She would get into my car after school and plead with me to let her stay home the next day or to homeschool her. Little did we know then her wish would come true, but by then she had finally settled in.

It is difficult to know as a parent, when to save your child, and when to keep trying. This year my daughter was nervous, didn’t eat, and was not excited to go to school, but it didn't take her long to sink her teeth into school. She acclimated so well this year, which will hopefully be her one (and only) full year of middle school. My son was more excited to go back to school this year. He has had some teary start days in the past. He has gotten scared, clung to me, and needed to be the kid that gets to help the teacher in the morning, so he can be distracted from his sadness. Historically his morning jitters start to pass after the first few weeks. As a second-grader he really loved his teacher and had a pretty great class of kids, but then the pandemic struck and school hasn’t been normal since.

Last year being home all together, all day, every day, had its challenges. For my son the loss of learning and the loss of the love of learning were impossible to ignore. He would sit in for his obligatory zooms and then the struggle would begin to get him through his independent studies the rest of the day. His tears last year were followed by begging to return to school. When the doors finally opened for the last two months of school, he literally hopped into school he was so excited. Again, he loved his teacher and was so starved for social interaction that nothing could damper his mood. When it ended at the beginning of June we were all sad.

This year he is in fourth grade and after so much loss of learning and loss of time at school, he and a number of kids are working with a staff of interventionists to get them up to par. The school has had a lot of turn around lately though, and with a new teacher and a new principal, it was even more challenging to return to school. Fourth grade is also the year the class sizes go up from twenty four children to thirty. The first day he went in happily since he was thrilled to be back with friends and back to a full day. When I would ask him about his teacher he would respond with one word answers. He went off the second and third day fine as well, but then things started to shift. There were a few situations that came up that seemed out of character for him. He was having trouble navigating conflicts with other kids, being silly when he should be focusing, and shutting down when he didn’t understand school work. A particularly challenging kid is in his class and that has presented more than a few issues. I have received calls, had zooms and emails with his teacher. I even got my first phone call from the principal this year, and I’m taken aback how quickly a child’s disposition can turn so quickly.

It is really a perfect storm of post pandemic, missing a whole grade, and a lack of academic confidence. He has started to cry on the way home from school because the day was hard, crying himself to sleep at night because he doesn’t want to go the next day, and then crying in the morning because he is afraid to go. My husband and I are trying to give him tools to help get him through the day. We try to remind him to take one section of the day at a time. We remind him of the good parts of school that he likes. I pack him up with an arsenal of snacks, positive reinforcement, and a promise to see him a few hours later at pick up. What he is feeling is anxiety and I know it all too well. As someone whose makeup consists of the same fear of new beginnings, my heart breaks for him. I believe in genetics and that generation after generation passes down the will to live, and also the worries about living. Since it is in my nature to lean towards the more anxious side, I need to find ways to nurture his nature now too.

The day-to-day can be considerably more daunting when you add in anxiety. Things seem harder than they need to be, mean more than they need to, and feel scarier too. We are working with him to remind him that he has the ability to turn some of that noise down to a calmer, safer, and healthier volume. We have our work cut out for us, but I also am holding out hope for a magical Halloween, and that things will begin to settle by November. 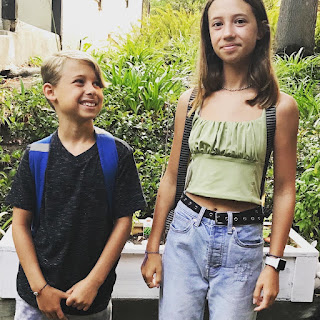