There is a recurring dream I have often enough that it is clear enough in my mind that I have to remind myself it is just a dream. I am standing on two feet, I bend down and lift straight up off the ground. Once I am high in the air I lean forward and soar. I fly through the air watching the ground below me as I pass it by. It feels so real and so effortless to fly up and above the ground below. I am alert, aware, and present in my body. I have to lean a certain way or I get shaky, but I know what I need to do to correct my positioning and steady myself.

Flying dreams are not uncommon, and I do wake up realizing that I can’t actually fly, but the feeling isn’t unlike when I used to figure skate. Every Olympic year a flood of memories of my skating days rush in. I became a figure skater when the 1988 Olympics were barely over. I watched Ekaterina Gordeeva and Sergei Grinkoff skate.  I  was so enthralled by their speed, their grace, and their enthusiasm. I wanted to do what they were doing and couldn’t wait to try. I begged for my parents to sign me up for a skating lesson and loved every second of it. My first coach is still a close friend to this day.

I rarely skate these days. My daughter who now is the same age I was when I started competing, really loves to skate. A few years ago she showed interest in taking lessons but there isn’t a rink nearby and the closest one is a fancy expensive training facility that was just too expensive. There was a local rink right near where we now live but sadly it was closed down the year before we moved in. I have a feeling if it was still there she would have followed in my skate steps. Similarly to me, she was inspired to skate from watching the Olympics. Last Friday night I took her, along with her friend, and my son to skate down at the fancy skate center. I decided to skate too since I didn’t want to sit in a cold arena. I pulled out my old skates from the garage and when I laced them up at the rink the foam from inside the tongue fell apart. There was no edge left on my blade since I have had these skates since I was seventeen. They weren't as comfortable to put on as I remember.

I took the ice and it felt familiar enough to skate around holding my son’s hand. He has only skated once before and wanted my help. Once he felt comfortable enough to let go, I tested my own comfort level. As a skater I was always taught to skate into the ice as opposed to on it, meaning deepening my knee bends and connecting to the ice a bit. I found this more challenging than I remember it to be. I used to take off speeding on the ice, turning backward, and doing crossovers around the rink. My blades didn’t feel sharp enough to skate into the ice and it had been a long time since I flew around the rink forward or backward. I asked myself if I missed it, and I didn’t, but I did miss the feeling of coasting off the earth. I missed the feeling of being in control at a faster speed than I am off the ice. I missed feeling the cool breeze as I glided around the rink. At the end of the session, all I could muster up the courage to do were a few single jumps and a few spins.

Friday nights at the skating rink are a teen's hangout. It makes sense and I was happy to see so many kids doing a fun activity together. My son and his friends were the youngest on the ice, and without a doubt, I was one of the oldest. It felt odd to see figure skaters practicing that weren’t even born when I was practicing like them. In my mind, I thought I would one day get a coach, relearn everything I used to be able to do and maybe even compete again. I don’t have that drive anymore though. I stumbled onto a Facebook page for figure skating adults and spent some time reading some of the posts. People complained about how much ice time and lessons cost. Or they were looking for a certain type of blade soakers, that you use to soak up the water after you have skated. They posted about finding time to skate around their work schedules. I didn’t join the group, this wasn’t me. I don’t think being an adult skater is in the cards for me again. Surfer yes, skier yes, swimmer yes. I do think I get some of the same feelings from those three activities. I don’t have as much confidence doing them as I used to on the ice, but especially swimming quenches my thirst for soaring off the earth. I love being underwater and moving in what feels like another world.

My daughter wants to go back to skate again tomorrow with her friends. I will gladly drive them to the rink, but I won’t be bringing my skates this time. As I stay in touch with my skating friends they update me on the skating world that they are still very much a part of. They all had daughters who are now skaters themselves. They are again waking in the early hours of the day to get to a skating session before the school day begins, only now they are just the drivers like my dad was for me. I am grateful for all the chauffeuring around my dad did to get me from rink to rink. I am often the chauffeur now and it can get old fast. My daughter still asks me from time to time if she could try a skating lesson sometime, she knows that her schedule is pretty full these days with other passions she has. She is in the school play, plays tennis and loves filmmaking. If I can help it she will keep pursuing areas where she can soar off the ice. The competitive world of figure skating can be pretty cold. I’m happy to have her skate with her friends on those teen Friday nights. I will drop her off next time though. 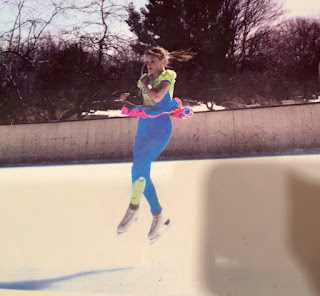