It’s been two years since our lives changed overnight. Two years ago we had each had a foot in both the pre-pandemic and pandemic worlds, one of which we were so familiar with and the other was entirely unknown. Everything prior to March 13th two years ago will be known as the before, the before the pandemic, before masks, before lockdown, and before all things zoom. It is important for me to commemorate this amount of time because we all went through a lot. Collectively and alone we suffered, we struggled, many survived and many did not.

Text messages went between my friend and me about what was happening in Italy. That seemed so far away so if they were closing their schools, it didn’t seem evident to me that we would be closing ours so soon. Another friend and I met at the park and talked while our boys played. She had already purchased a new play structure for her backyard because she was worried that if they closed schools that she wanted her kids to have something to do outside. Another friend bought pounds of dried beans and rice in case stores ran out of food, while another stocked up on anti-bacterial wipes. I watched them all thinking they were all over-preparing. I was one of those ignorant people who thought that it might take a few weeks but then everything would go back to normal. I was so wrong and they were so right.

Honestly, when schools shut down a week early for spring break, I was happy. I wasn’t happy with what was happening around the world, but I thought the kids could all use a break and we would all be back in three weeks anyway. I remember reading an article about how people were getting themselves more worried about Covid-19 than they needed to be and the anxiety they were causing themselves was worse than the virus itself. Whoever wrote that article was also very wrong. What started as an extra week of vacation turned into everyone's worst-case scenario. Hospitals were filled with dying patients. The virus was more contagious than anyone initially thought. People did indeed panic buy food leaving grocery store shelves bare. We were afraid to walk out our front door, afraid to touch our own mail, we wiped down everything from the outside world and stopped seeing other people.

After it was clear we would not be returning to normal for some time, we wondered how and when kids would be allowed to return back to school. When my friend told me that they wouldn’t reopen it at all that year, I couldn’t process her words. Unprecedented was the only word that would stick in my mind. None of us knew anything and we just got through the day as creatively as possible while wearing so many new hats. Teacher, chef, entertainment coordinator. I would clad a mask and take the dog for so many walks just to get out of the house. At one point early on I started to feel claustrophobic and asked my husband to take over while I went for a drive. I couldn’t be inside anymore and yet we weren’t supposed to go anywhere. I had to see something that hadn’t changed so I drove to the ocean. I didn’t even get out because we were not allowed on the beach. I just rolled the windows down and breathed in the salty air as I stared at the ocean. I was envious of its crashing waves, the tide moving in and out despite the pain that people were feeling everywhere, it kept moving unaffected by a lockdown. It made me feel at peace even if it was only for a few moments.

That last Friday before the lockdown began the final school bell rang and I walked my kids over to our friend’s house. We were unsure if we should be socializing, but we knew it might be the last time for a while so we let the four kids play in the house together while my friend and I had tea. This was all before masks and social distancing were in our vocabulary, yet even so we were afraid to get too close. We were careful to wash the mugs and spoons we just used because we knew nothing about how this new virus could spread. When we said goodbye that afternoon, little did we know how very long it would be before we would step foot in each other’s houses again?

The last day of school came and went without any ceremony. My daughter was in sixth grade and after such a challenging transition to Middle School, she had finally started to like it when it all shut down. Middle school is hard enough to get used to in the best of times so if there is any age to avoid your peers I suppose I would choose to lose out on middle school. My son was in second grade and having the best school year. He loved his teacher and had a wonderful class of kids. For him, it was devastating to end the school year with zero closure. That summer came and there were no camps to send kids to. There was no traveling to see the world. There were no family get-togethers, so my friend and I tried to make the summer as interesting as possible. We took lots of trips to the beach, which had opened again for the summer.  We “traveled” by doing crafts, eating new foods, and learning about other countries. We did scavenger hunts. My kids and I painted rocks, did a lot of sidewalk chalk, we raised chicks, fostered kittens, and played a lot of board games.

That August we took a family road trip because it was safer to manage than getting on a plane. It was one of the best experiences we have had as a family and one that we talked about doing but only made happen because of the pandemic. When school started up again it was all online which was a nightmare that was only countered by the fact that we could get out of town and zoom from anywhere, so occasionally we did just that. These little trips were our self-preservation. I baked more, cooked more, read more, and created more. The quiet time together wasn’t all bad. I am forever grateful to have had one year that went by slowly enough to really see my children. When it was time to go back to school, all of us were ready. I would be lying though if I said there weren’t things I missed about the slower pace the pandemic made us take.

Now two years later, things are back to a new version of normal. We still wear masks a lot of the time. We still don’t just go into each other’s houses. Lots of people just work from home, but school is back in person. In some ways, I am still really missing the interaction I had a few years ago. In other ways, I am content with a simpler life. The virus has been a roller coaster but it now seems a lot more in control and a lot less deadly. The world is by no means in a great place these days, but we have come a long way together, and I will take whatever peace comes my way. May we all be healthy, safe, and at ease again soon. 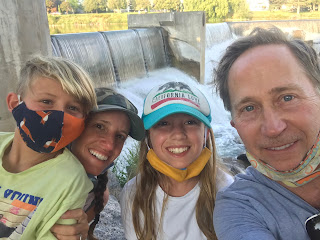