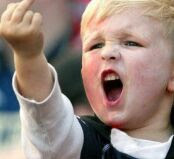 Last week I got a wake-up call from a friend. I brought my sweet little munchkin to her house to play. Her daughter is four days older than mine. The girls wanted to do play doh so we set it up on a table and sat down. Almost instantly there was a shriek of whining. My daughter wanted to sit right next to me. There are days where I swear if she could get back into my uterus she would. My friend sat across from her daughter and I sat across from mine. The table only had four chairs around it but across wasn't close enough for her. I know as parents we need to pick our battles but I didn't want to budge on this one. Lately, I feel I take the easy way out too often and just give in just to prevent a tantrum.
Deep down I know I am doing a big disservice to my daughter, my husband and myself by not being firm with her. I know there is a whole movement of people who don't believe in saying "No" to their children. If I can't admit out load that I think I fell into that group I can at least write it here. I think I fell somehow strangely, unknowingly, and unwillingly into that group. The only difference is I don't believe in not saying no. I was just too scared to do it.
Holding my whining and crying girl in my arms, I said, "I am sorry you are sad. I know it's hard but mommy is going to sit right across from you. I am right here, it's okay." She cried louder and for dramatic effect threw in some screaming. My friend looked up at me and offered me some helping words. Very gently (since parenting advice is not always well received), she began to share how hard this same behavior was for her, and what she did. I told her, no begged her, to please give me advice. I knew I needed to make a change -- I just needed a little push.
She explained that there is a time and a place to protect little one's feelings but when it comes down to something that has to get done or a protest from a child that gets in the way of having to get out the door, you have to remind yourself of who's the boss.
Sounds simple, but don't get too sassy -- it isn't.
The definition of the word tantrum is a childish fit of rage; outburst of bad temper. So? No big deal, right? What is wrong with me that I am hesitating to assert my authority with my two-and-a-half year old? The word rage and the word bad. There you have it, ladies and gents (other than my dad, I suppose not a single man will read this -- but hey, it flows better). I don't like when anyone is angry. It unnerves me. It's uncomfortable and I tense up. I want to run away and avoid it. The word bad brings to mind naughty, disobedient, spoiled and even a little evil. So those two, in combination, make me self-conscious, and maybe even a bit embarrassed. What does it say about me that I can't calm my kid down? Apparently it says that I am forgetting that I have to say no sometimes. It also says my baby is sad, which in turn makes me want to rescue her. And then, I just want to check out. Neither is a very good option.
Thanks to my friend reminding me that she is two-and-a-half, and that's what their job is at that age. She needs to protest, to figure out her boundaries and my boundaries. Once I told her in the car (as if this awesome bit of communication was going to fix everything) that mommy and daddy are in charge, and she is our little girl. As such, she has to listen. Her response was as if she stuck her middle finger at me. She said, "No, mommy is a lady, daddy is a little boy and I am the boss." She had that all a little backwards, so I took it upon my self to change things a bit this past week. I stopped asking her to do everything. I told her when it was important and asked her when it didn't matter. The first few days were rough, but a change has been made. I have never seen one so drastic. Then she got sick and all rules went out the window and we had a few rough days again but now she is getting it, and I am getting it too, and it's working.
Now who's the boss? Me, that's right. Too sassy?
Posted by Shea