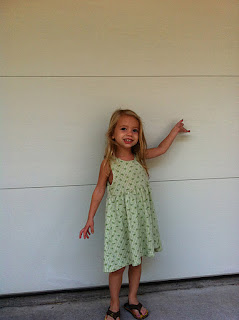 The moment has arrived in my three year old daughters life where what she wears has become of great importance to her. Some of my friends with little girls have gone through this even earlier, so perhaps I should be grateful she has this much variety to her wardrobe to date. Now though, it's a battle. She has one dress in particular that she loves. It was given to her by my cousin whose daughter wore it thirteen years ago. It is a cotton green and white gingham dress that Twig has named "my big mint dress." If she could wear it everyday, she would.
Recently there is a debate shortly after waking up about what she will wear. Even if the dress is dirty and in the laundry hamper, she'll debate as to why it's ok for her to wear it. If it is cold, she will plead to wear it over tights and a long sleeve shirt. If she has picked out a nice outfit with pants she will demand that she wears it over the rest of her clothes. Today she wanted to wear it to gymnastics and tried to convince me that she would pick it up when she runs.
I suppose there are worse things to be concerned about. I know at four, a lot of girls refuse pants all together, saying pants aren't pretty enough. I'm glad that at the moment this issue doesn't have anything to do with how she looks. If it did she wouldn't want to wear it all the time because trust me -- when she wears it under different layers of clothes and colors, pretty isn't what comes to mind. The fact that she dressed herself now is clear for all to see and she is proud. I'm just glad she will still put on a pair of jeans from time to time. Even if they have to worn under the "big mint dress."
Posted by Shea