I have names picked out for when the day comes that we can get a dog. Twig is three and a half and I am two months away from having a baby, so getting a dog right now is not exactly the best time. Last night though, my husband and I started talking about it. Twig has a few friends with dogs, and she has a real fondness for them. Especially if they don't jump on her. My husband and I always assumed one day we would get one but not until she was at least five or six.

We even know what kind of dog we would want. In some ways it's easier to picture what adding a pet to this family would be like than what a new baby will be like. I had always wanted one growing up, but my family had their one dog before I was even born. My husband has had many though, and can't imagine life as a child without a pet. He had dogs, cats, turtles, snakes, birds and fish. He can recite all of their names, tell you what type they all were and how old he was when he had them. He says the value in having a pet as a kid is something he wants to pass on to our kids.

Teaching a child about caring for something other than themselves is the first thing that came to mind, and I agree with the importance of that. He also spoke of what it was like to lose a pet, and how experiencing the death of an animal was such a powerful lesson to learn at a young age. At this moment in time, Twig keeps bringing up death. I think mostly because it is a hot topic within her peers at preschool, but also because without much emotion attached to it, she is fascinated by it. Of course, at her age she doesn't totally get it, but I am much older than she is and I don't get it entirely myself. I do understand that it's forever and that's the part that will take her time to wrap her head around.

We had dinner guests the other night, and the little girl of six had unfortunately lost her father to cancer. This happened three years ago and death is something she is very comfortable talking about. So comfortable that she introduced concepts to Twig that have prompted many conversations since. She now knows that everyone dies, and that there are many different ways to die. She asked if she could die with me, and I interrupted just as this girl said, "Well, there is something called suicide...". I'm all for openness, but I am not quite ready for that. Twig now asks if most sick or old people are going to die soon. 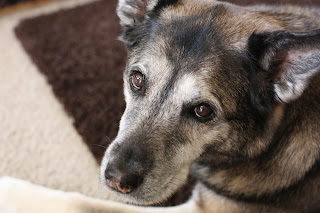 Even though I never had a dog myself I have gotten attached to a few of my friend's dogs. Dagmar belongs to one of my closest friends. She has been by her side since I met her over ten years ago. She was a cuddle bug and we had a lot of fun together. Whenever I went to visit my friend I got the warmest welcome from her. These days she is getting older, but she has seen us through a lot. When I brought Twig over to her house when she was a few weeks old, Dagmar was so gentle and protective. Now my friend has two girls of her own. The second is only a month old and yesterday while taking Dagmar for a walk, her legs went out from under her. It is an emotional time to think my friend could lose such a close friend, but rarely do our pets outlive us. I just can't imagine how her almost three year old will handle such news. Whatever happens "Diggy" (as she is often called) has given a lot of people a lot of love. I do look forward to this family expanding our hearts to a furry friend one day too.
Posted by Shea