About a year ago my neighbor decided he wanted to build a deck behind his house. We live in the hills, so the deck would have to built up into the hillside behind his house. The hillside also happens to be the view from our bedroom window. Eventually it would just be a beautiful hillside with a flight of steps going up, but for a few months it was a hillside with a couple of workers who could have a great view into our bedroom. There was never anyone up there before so we never had to get window coverings, until one day while I was reading on my bed I looked out the window to see a man looking back at me waving.  That was my first encounter with Mauricio.

For months he worked on the steps. After two more waves, into my room I put curtains up. His intentions were good, but boundaries were crossed by him one too many times for me to be super friendly. I even wrote a blog post here about how he irritated me so much when he commented on Twig wetting her pants once and how inappropriate I thought it was.

One day a few months ago, while on a walk, I happened to feel particularly chipper and friendly. When Mauricio saw me, he commented on how strong my stomach was getting I felt carefree enough to tell him that there was a baby in there. A few weeks later I lost that baby. While mourning the loss I took another walk on my street. While trying to process how much pain I was in, I looked up and saw Mauricio walking towards me. I froze! I found encounters with people who had known about the pregnancy the most difficult thing about miscarrying. It was like a race to tell them I lost the baby before they could ask me how I was doing. This time I stood face to face with this man who I had tried so hard to keep a distance from in order to protect myself, and now I had to tell him my sad news. Now I know most normal people would say I didn't owe this handyman gardner guy anything. I am not normal though, I was too much of an open book when I told him in the first place. Since he knew I was pregnant, I felt like I had to remedy that misinformation now with the truth. As he opened his mouth to say hello I interrupted him with tears rolling down my face and said "I lost the baby."

Even with a language barrier, a cultural difference, and very few strained interactions between us, in that moment he understood and gave me a hug. He said it was all part of a plan. Now whether or not I believe in higher powers, things being meant for a reason, or "plans", I was grateful for his hug. Months went by and I kept pretty much to myself. I got pregnant again and since the hillside deck was done, I stopped seeing Mauricio on the street. Today I pulled out of my driveway and he was pulling up the street. He honked to wave and as I passed him I rolled down the window to say hello. He quickly noticed by very pregnant belly and smiled. He said congratulations and told me how it was all supposed to work out this way. He couldn't believe how much time had passed and as I was about to drive off he said "Bingo! You won the lottery!" Again there was a bit of a language thing but I knew exactly what he meant. Today running into Mauricio was as exciting as running into an old friend. He was so genuinely excited for this baby, and I was so happy to share that with him.  For the second time an interaction with this man has brought me to tears but this time they are happy tears. He said he will be around cleaning up my neighbors hillside and that he will get to see us again for a while.

With all that said, and in spite of our new friendship, I'm still so glad that I have shades on my windows now. 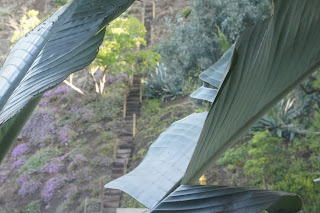