When I was a little girl, just about my daughter's age actually, my Grandmother used to say she would
shove me down her throat. She would follow that statement by calling me Miss McGinty. My sister remembers it as my grandmother saying she was going to jump down our throats, but regardless we both remember it scaring the living daylights from us. I spent so much time wondering how she would be able to do this, and how much it would hurt. We loved our Grandma and she was the sweetest woman, but we obviously didn't quite get her sense of humor at our age.

Last week at gymnastics Twig's coach told her she was going to eat her toes if she didn't point them. I feel like we say silly things like this to her sometimes and she laughs, but she definitely wasn't sure her coach was joking. In fact she asked about it the whole way home, and then continued to bring it up to whoever would listen. She would say it smiling and giggling but I could see she was still trying to figure out if anyone thought her coach would actually try to eat her toes. I explained that she was joking and promised her that her toes weren't going to get nibbled off by a hungry gymnastics teacher.

Today she had gymnastics again. It wasn't the best morning leading up to the class. She had already cried over tiny issues that cost her a bunch of tears and us both a bunch of time. I was patient and gentle with her and eventually the tears ended. We left for class with enough time to spare and when we got there she said she didn't want to go. I tried to talk to her about it and she seemed okay as we got her leotard on and got ready. Just as the class began though she clung to me and started to cry. She said she didn't want to go in. I asked her to tell me what was going on but (she is three in a half maybe -- self expression isn't a refined skill at this point) she shrugged her shoulders and said she didn't know. I said I would stay close and watch her but she insisted on leaving. This is where I started fuming up. This is the second time I drove all the way there to have her flat out stubbornly not go in to the class. I told her if we leave I will not be happy and that we are not going home to play. She would have to go straight up to a nap. She said she wanted to leave.

Pissed off and tense I strapped her into her car seat and drove home. Trying not to over react, I stayed quiet to make sure I didn't say the wrong thing, but within five minutes I exploded. I told her she wasted my time, and that I do not like driving all the way somewhere and turning around to go home. I told her I wasn't only around to drive her places, feed her snacks, play with her and then be okay when she gets into a bad mood. As I am saying this, I'm listening to my words come out of my mouth. Of course I am there to do those things. What the heck is the definition of a mother? Those are the job requirements. I was so angry and concerned that perhaps I had been manipulated again, or that Twig doesn't seem to be able to spring back from a meltdown the way other kids do, or why aren't any of the other kids even crying when they go in for class. If any of them get upset they can reel it in fast but not Twig. Then I realize two things. First off, she only does this for me. She hates separating from me and lets me know in the biggest possible way. Secondly, I forgot all about the toes.

Usually my friend drives her to school but last week my husband and I took her because we had a parent teacher conference. She had to be pried off of me while I tried to sit with her teacher in the same space. If I am around and she can't be with me, it is really hard for her. She is fine with anyone except me. Of all people, I should understand that. My parents worked at the sleep away camp I went to. I hated it because even though I wasn't away from them, I could see them on the other side of the dining room but wasn't allowed to be with them. It was a bit torturous. Also, I suppose if my toes were threatened I might be afraid to be alone with someone who I thought might eat them. It's not far off from Miss Mcinty and the throat shoving. I am years away from that threat and even though I don't remember how exactly she said it, the feeling of fear that it it caused is clear in my memory. 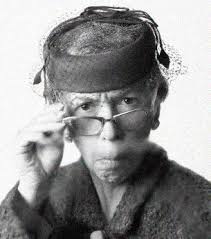