Warning: This post is not for those with a weak stomach and/or a vivid imagination. Especially those who might be experiencing nausea of any severity.

I was fast asleep when I heard "Mama" and knew something was up. Either the bed was wet or she was sick. I felt her head and immediately knew that the following day's plans were all about to change. It was a beautiful day in early July, so a fever seemed out of place, but it was very much making itself known. Illness after illness seems to roll into each other when you have more than one child. I think we get a reprieve of maybe two weeks tops.

So after canceling camp, gymnastics and a get-together, I settled in for a nice long day at home. First we started with a wash cloth and then set up shop in front of the TV (a perk of being sick is the TV can stay on all day if it makes her feel better). With her lethargic in front of what will be the first of many "Curious George" episodes of the day, I made it my mission to keep my little one from getting too close, and getting too bored. I took him out to the yard, kept him fed, strolled him around the pool in his trike -- anything to keep his day some what normal. When he napped she was either watching TV or sleeping as well, so in some ways it was more manageable than the two of them pulling on me at the exact same time like most mornings.

I was welcoming this change of pace in some ways. Nothing like a sick day to make you realize that you have been moving too fast. Slow living shouldn't come at the cost of your kid's health, so I already appreciated the lesson I got from this day. It was still only the morning and although I like this slowing down idea, I might need some spark to my day. I sat down to give Twig a sip of water to make sure she was hydrated and she laid her head back down on my lap. It only took a few minutes for the excitement to kick in. That sought-after spark had arrived. She began to throw up. She was on her back so first she drenched herself, then the suede pillow and then the shag rug. I sat her up and she just kept going. At this point I aimed her over me and said, "Throw up on mommy, on my lap, on mommy." She is very good at listening to directions and the more specific the better. As horrible as it would be to have a pool of vomit between my legs it would not be as hard to clean up as on the furniture. After all I am an expert at protecting furniture from her vomit (Crate and Barrel couch). So after getting covered from the waist down, I grabbed her and turned the shower on. We both recovered only to have it happen again, this time in a bowl though.

It was a rough couple of days home, but she recovered. Of course it has moved now to the baby, but at least now I know what I am dealing with: as long as we stay off the carpet and the couch, we should be fine. 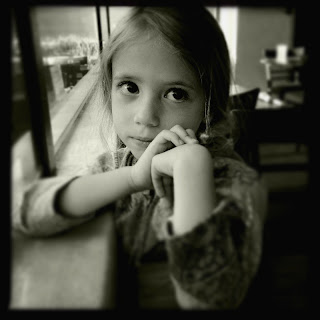