The set up for the first day of school was huge. She has been singing songs about going off to Kindergarden since last winter. It seemed the second half of preschool was all about preparing her for this year (making sure she knew her letters, numbers, had good social skills and an interest in learning). When we sat down with her teacher she told us that she was "beyond ready." Academically and socially-speaking, she was a great candidate for Kindergarden. The only thing they couldn't exactly help us out with was separation anxiety -- and well, that is the area with which we need some help.

She seemed so excited when we talked about Kindergarten.We live right near the school so she got very familiar with the yard. We went to all the appropriate pre-Kindergarten events. She would proudly tell anyone who asked where she would be going to school and when, but as the day approached she had more and more questions. At the picnic that the school put together to introduce the new children to the teachers she had a look of terror in her eyes. They gave out popsicles at the end and so she asked that I pick her up when the popsicles came out. I explained that was what they did as a welcome but they wouldn't be having them every day. Then I made the mistake of telling her that the teachers had told me that after lunch they don't do any academics and that it will be all fun stuff in the afternoon. To that she asked what do they do the rest of the day then. On the fly I said just fun learning but sitting down and that they might get to run around a bit after lunch. I feel like I keep just having to spin everything positively because anything is fuel for her fear right now.

The build up to this day has been huge even for me, so I can imagine the whole thing to be daunting to her. I cannot believe my baby is off, all on her own, in elementary school. The morning began with her waking up with tears. She said she didn't want to go. When it was time to leave she clung to the furniture and I would pry her from one piece and she would run into another room and glue herself to another chair. I finally got her out at which point I just needed to get her there. We walked over with her stomach more full of butterflies than food. She picked out a dress with her favorite colors, blue and green. She wore her brand new purple back pack. She had her hair in a pretty little braid. She had tears running down her face.

The teacher Mrs. French was nice but not overly sweet. She was even a bit matter of fact which I think I appreciate now. She invited the parents in with the disclaimer that it would only be for today, and tomorrow drop off is at the door. The kids were to sit on the rainbow rug and we were to stand around them. Read: parents stand around the kids and me because she wasn't quite ready to let go of me. We listened to some details about the year and then a story was read called "The Kissing Hand" about a raccoon who gets a kiss from his mother to last him his whole first day of new school. We all then kissed our children's hands and began to say goodbye. The whole thing was very sweet and emotional. She then clung to me and when the teacher's assistant saw her crying she came up to us. She asked if she was having a hard time (duh). I locked eyes with her at the moment, nodded, and my eyes began to fill. I had held it in as long as I could and just couldn't anymore. Actually I wasn't aware of how hard it was for me until someone recognized we were struggling. I quickly asked the woman to take her and fled. It was not the way I wanted to say goodbye but I did not want her to see me cry.

I asked Twig this morning to find someone who was sad or lonely and to be nice to them to help them through this first day. I didn't see anyone as upset as she was, so I am hoping some of the other kids got the same advice. As I left I saw another mother tearing into a tissue. She shared an extra with me. I think I will wait a good ten years to share with my daughter that the mom's were crying outside. I wonder what she is doing right now and I pray that she has stopped crying. If not I researched home schooling options as a back up plan. I'm kidding. Mostly. 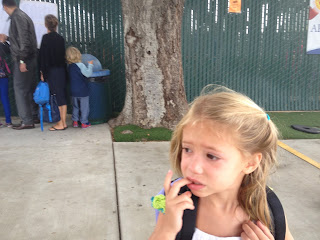 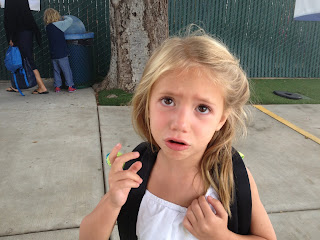 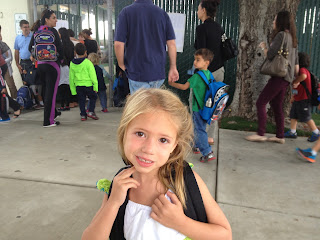