One of my best friends is about to have her third baby. She is strong woman and an excellent mother. When we were pregnant with our seconds together, she secretly confessed to me that she hoped it was another girl so she could justify a third and try for a boy. She manifested exactly that. Although not on purpose.

The hectic craziness that comes with a new little human entering your already chaotic household was not that far behind her when she realized her period was late by a few days. When she told me she was concerned, I didn't even really hear her because it just didn't seem possible. With each day that passed the magnitude of it was getting bigger and bigger. At that particular moment in time, she and her husband were not in the best emotional or financial position to add another member to the family. They lived in a cluttered two bedroom apartment. They were just coming out of the haze that comes with having a baby. Their second daughter had just turned one and they were looking for a new place to live, and a good night's sleep.

When a pregnancy test confirmed she was pregnant she texted me the picture of the stick. It was the complete opposite of the previous pregnancies. The first time, I knew she was trying -- she came to my house and we made small talk for a half an hour, while both of us were tip-toeing around the issue. I was afraid to ask her and she wasn't supposed to tell me because she promised her husband she wouldn't tell anyone. I just had to ask and we danced around the room overjoyed. The second time it was equally as exciting. This time, the only thing in common with the other two was that I was the only person other than her husband to know. They were in denial. Unsure what, if anything, to do about this.

She cried to our OB and he couldn't have been more understanding. He gave her different scenarios, dates at which decisions would need to be made, and a very objective stance. With time off or on her side, she went home to think about it. With each passing day the decision diminished because an attachment had grown. Even if they couldn't quite wrap their heads around a third child, they had a harder time wrapping their heads about not having it. Like many complicated situations it wouldn't be as simple as coming to a clear choice. When her testing for the health of the fetus came back the results were terrifying. There was a one in 34 chance of the baby having birth defects. She had to do her best to but a screeching pause on her attachments and wait for further testing. At this point I was so at odds about how this would play out and this baby wasn't even mine. It was all such a roller coaster of emotions.

They scheduled an amnio and then quickly paid an additional few hundred dollars to get a rush on the results. Amazing news came shortly after that the baby was healthy and that it was a boy. It was such a relief to hear he was healthy and everyone became quickly aware of how wanted he really was. Now as her last few weeks of what seemed like the fastest of all her pregnancies, the element of surprise is tarnished a little, but I don't think there are any complaints about that. There is nothing to shock her third time around. Yes, it will be more crazy and crowded trying to do anything. Her house will probably get that much messier and that much louder. They are about to go through another year of intense lack of sleep. They know the drill though. Her body will do some crazy things, and then her mind will think it needs to do some crazier things, and maybe third time around she can out-think it. If not, tissues will be available for the many tears that will fall.

When all settles and six months pass she will have a giggly smiley little guy who will sit on his own. He will then laugh, stand, walk and play. By his first birthday we will all marvel at how grateful we are that he is here. I will get my newborn fix through her as we are a two-and-through family, and believe you me, I have no interest in going through pregnancy, birth, or another lick of postpartum depression, but I am beyond words jealous of getting to have another littler person become just that before my very eyes. 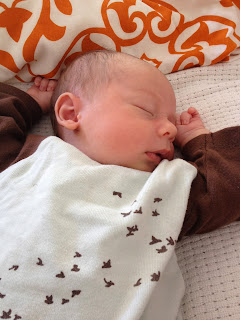