The doll that seems to be the "Cabbage Patch kid" for my daughters generation is an American Girl doll. No one is getting trampled outside Toys R Us like when I was a little girl, but little girls seems to want them just as badly. I was pleased when my daughter never seemed to notice them. She asked me once why there were older girls carrying dolls dressed identical to them, but it was more a "Isn't that weird, mama?," kind of question. That was before her friend from London (not American) came to visit us and brought her new American Girl doll. Since this little girl is my daughter's best friend, the doll suddenly got my daughter's attention.

The American Girl company was started by Pleasant Rowland, a former school teacher who wanted to create a line of dolls that represented American history. She started a small catalog-only business that was family owned. I read that she vowed to keep it that way as to keep it high quality and authentic.  Each doll came with a book that told the story of a girls role in that time period. The 18-inch doll was a success and history lessons were now available in a package that girls were excited about. After twelve years though, Pleasant Rowland sold her company. I guess vows get broken when Mattel offers to pay you $700 million dollars.

What was lost in that business deal was much more than a little catalog company. Little by little, the dolls gradually lost the historical richness they previously represented. A new line of friends were made. The idea that every girl in America could find a doll that looked like them was a marketing idea that Mattel ran with. The image of the company changes along with the look of the doll. You can always count on the Barbie makers to make the doll thinner than it was, the feet smaller, and the face more made up. A once female-owned company went to Mattel which has about eight board members and only one of them is a woman. So once again, a popular girls toy gets more focus on it's look and image than its empowering stories that made it appealing in the first place.

A friend told me that despite the company's issues the American Girl store is such a fun place for girls to go. She described it as warm and inclusive. I don't doubt that it is a dream come true for little girls to have a place to play and lunch with their dolls. The cost of everything in that store is anything but inclusive though. How does it represent America if only the wealthiest of people can afford it. The doll alone is $125. To get its ears pierced is $17 (which involves screwing a hole in its plastic head). The dolls used to be made out of high-quality vinyl, but are now hollower and made with thin plastic. The American Girl doll is also of course made in China. I have plenty of items made in China but it seems odd that a doll meant to celebrate American history would be produced in another country.

My daughter forgot about the doll for a few months but was reminded when she noticed another friend of hers had one. She liked how the had so many accessories and that she could care for them. I watched her with a Build-A-Bear doll that she got at a birthday party and saw that she actually played with it. I wondered if a I was depriving her of a doll experience. She had baby dolls but no dolls that represented her current age. She didn't want the doll for her birthday because she knew it cost so much and that she would only get that and that alone. She opted for a party. One day we went to Target for something else and she noticed the "Our Generation" dolls. They were the same idea as American Girl dolls but without the history part. I love the idea of learning history through play and especially if it is with the focus of a female story, but lets face it the American Girl company lost it's original goal years ago and what ti got replaced with was longer eyelashes and a skinnier frame.

When my daughter saw the dolls that were in Target, she really wanted one. I explained that they were not the same company but the same idea. She asked how much they were and when I told her that they were $27. She asked if she could have this kind of doll. I reminded her of the birthday present that she had already asked for and that if she wanted this instead she could have it. Or I offered that she could buy it with her own money. She went home counted up her coins and had over $40 in coins. I told her if we went to the bank to get papers to roll the money that we could return with the money to Target that same afternoon. When she returned to the store with her rolled coins in her hands she was so excited to pay for the doll herself. She handed the cashier her money and went home a very happy girl. That was over a month ago and she has played with that doll everyday since. When someone asks her if it is an American Girl doll, she says proudly that it is actually an Our Generation doll. Both products are the same height, the same concept and both give kids a lot of joy. She didn't end up learning much history, but she did learn a lesson in economics. It was the first time she learned anything about branding, advertising, and overseas production. She learned that consumers often buy into an expensive package and that you don't always have to. And that lesson is a valuable one. 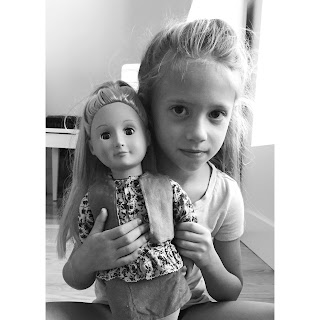