My Time At the Y

A few months ago I wrote about some wisdom my husband had gleaned from a yoga class at the local Y. I finally had some time to take a class on my own, since my boy goes to preschool there for a few hours. I couldn't fit in a yoga class that worked with my schedule, so last week I tried water fitness. I have done this in other places before, so I knew I was likely to be the youngest participant. But I had no idea what a wild class I was stepping into. Like anything else one tries for the first time, I spent half of the time trying to figure out if I liked it. Then I assessed if it is a good fit for my level of fitness, and then once those two things were decided, I commited to giving it a full chance. This class threw me though. I had such conflicting responses to whether I liked it, or if it was good for me.

Indeed I was the youngest person in the pool. Other than the obvious fact that water aerobics is not hard on your joints, I can't figure out why it mostly appeals to older people. This particular class was no joke. If done correctly this was an intense workout. We were making some waves (at least a few of us were). There were some delicate grandmotherly ladies in the pool barely making but a ripple, but the charisma around them made up for it. The diversity in this part of town is one of the things I love about it. Old, young, black, white, rich, poor, and fit and not -- it was all in the pool that day. Well, except for the young. They come to class after the seniors for parent and me swim, which up until a month ago is where you would find me in the pool. This class is a whole other world from that. Although I was welcomed by a grandma that used to take her grandchild to that class with me, she was the only familiar face in the pool.

I got a lot of funny looks by my classmates. One gentleman joked that I should stop being so energetic. I told him I would tone it down, and he said "Yes please, like the rest of us." Another woman told me that I was too skinny to be in the class. I guess she didn't hear the news that working out isn't just for weight loss anymore. A woman nearby the grandmother that I knew asked her if I were her daughter.  Someone else asked me if I would be coming regularly. Everyone seemed so shocked by me being there. I found this most entertaining.

The instructor was so bizarre though. If anything would stop me from going back it would be him. He was so intense. He was more like a preacher than a teacher. I wouldn't mind this if his sermon was a bit more inspirational but his message was delivered in weird phrases. For example, he kept saying, "You don't need friends, you need your health." I beg to differ. You most definitely need both of those things. He also said if you are sitting at home lunching with your friends that won't help you stay out of the hospital. Now I know his audience might take more trips to the hospital but still, lunching friends is crucial to one's health. He had enthusiasm, I will give him that. He definitely had me working hard, while entertained, those two things alone is worth going back for another try.

At the end of the class the mom's with toddlers began trickling in by the pool. My new senior pals cooed at all the little ones. They used to do this with me when I came with my son, but no one seemed to recognize me without him by my side. It's interesting how much less attention you get when you are without a child. It can feel lonely and odd, without my boy around.  There is only a short amount of time and many ways I can spend it, so I have to pick and choose wisely. 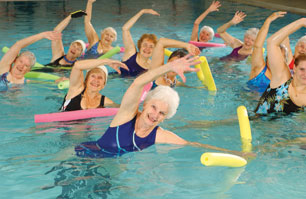