Student Of The Month

My daughter received the Student of the Month award! I am proud of her and excited that she is recognized for her work at school. She wanted this award last month, the first month at school, but instead her friend deservingly got it. Both girls, are the "student of the month" type. They are extreamly well behaved, studious, focused, quiet in class, and smart. It was even predictable that the two of them would be the first to get this award at the start of school. Last year, when they were in different classrooms they both stood next to each other with the award during the first school assembely.

Last year when I was new to the school and recieved a note home that she would be recieving this award, I was also excited for her. I quickly realized though that only 9 kids per year in each class would be rewarded with this. We had come from a school before that had an assembley every week and gave out two principal awards per class per week. By the end of that year everyone had got one at least once, or in my daughters case three times.

I am not sure every kid should always be a winner, but rewards systems are flawed. When my daughter started preschool there was a chart with red, yellow, and green on it. Each kid had their names on clothes pins and if they got a warning they moved to yellow, if they continued to misbehave they got a red. I hated this system. Especially the day that I came to school and found my own child's name on red. She didn't even get a warning they had said, because she loved to climb and she had climbed up the fence that leads out of the play area. She had also influenced her friend to do the same. That was the first and last red she ever got in preschool, and I didn't find it misbehaving as they did. I was impressed at her climbing skills, but reminded her that it wasn't allowed, nor was it safe. I was happy to learn though that a year later the preschool replaced the chart with a marble system for when kids did things well, as opposed to pointing out what they did wrong all the time.

I know that as adults we earn rewards all the time for doing things the "right" way. We also get penalized when we do things wrong as well. There are plenty of incentives for good behaviour for grown ups, so I know the lessons to be learned from rewards are not all bad. That being said though, there are a lot of people in the middle who just don't get recognized. The really obedient, but shy child who never raises their hand in class might not ever get to be student of the month. Or the enthusiastic, bright child who is so excited to learn that he can't stop talking. Or that child who has behavior issues that has therapy practically everyday, or worse that child with behavior issues who has no help at all. These kids aren't likely to be student of the month either.

I don't think getting an award like this is life changing, or that important in the grand scheme of a child's life, but for those kids so rarely recognized it can make a huge difference. Think about those kids who are given up on so quickly in their education because of misbehavior. I know that there are amazing teachers out there who say that no matter how challenging it is they can find something wonderful in each child. If that something wonderful was nourished and encouraged all year than ever child would deserve an award.

The day my daughter did not the award and it went to her friend instead, she sat down next to me and told me that her friend was student of the month. I tried to stay as neutral as possible not sure where her emotions were headed. I said "Oh, that's nice, how do you feel about it?" She said she was proud for her. The next thing I heard was my daughter sniffling. When I looked at her she asked through tears, why she didn't get the award. I reminded her that she had run out of class after me a few times in the first month of school and maybe that is why she didn't get it. She immediately stopped crying and said "Oh, right."  For her putting her best foot forward is so important, it also comes very naturally to her. I was happy to see though that the award ceremony had some kids called up who were not the typical "student of the month" kids. Including one of my daughters close friends who is now in another class. He talks a lot but is indeed a passionate, enthusiastic, caring, and sensitive student. I was grateful that he got an award. When he got his award last month I was front and center cheering him on with his mom. He was so shocked and excited that it had me almost believing in this award. Almost! That being said, I am proud that my daughter for continuing her diligence, hard work  and her new ability to stay in her classroom after I say goodbye to her at school.  That alone deserves recognition! 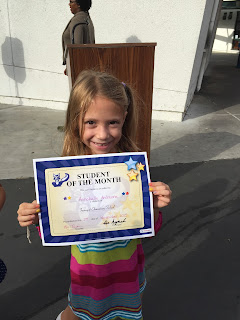