Running Up That Hill

It was early Sunday morning. The adrenaline and excitement didn't pull me awake as I thought it might. I was slower getting ready, not a good start for a day where moving quickly is the goal. I skipped the shower and put on workout pants, a sports bra and the race t-shirt. It was my 5K day. This is my third one. I ran last year but the one before that, I was 27.  I am not a runner. I don't thrive on it like some people. I don't I have a runner's body, my knees turn in slightly so if I run a lot my knees start to hurt. I only ever took it up years ago for a short time because I was dating a runner. I wanted to see what he was so addicted too. Thank goodness he was an athlete and not a druggie, because for a few months I was hooked too. On running.

A few months later our relationship ended, and soon after that my love of running ended too. I was on to exploring new possibilities in this fitness and dating world. I think maybe thats when I started dating a spin instructor. A few years after that though I was living in LA with a roommate who was training for a marathon. She was going to do a 5K as part of her training and asked if I wanted to it with her. I was game, and began taking a few runs around the neighborhood prior to the race. I didn't really want to "train" but I also thought it would be good to not embarrass myself and collapse from exhaustion during the race. As a former figure skater I stayed in shape, but running was a different beast. There is so much more of a mental challenge for me. Much to my surprise I ran a ten minute mile that day, and finished the race in half an hour. I was happy with that, and again put running behind me.

After getting married, having two children, and a few other things that happened in those ten years, I saw a flyer for a 5K that appealed to me. The money that would be raised went to support family fitness and heath. I was already an ambassador for a program that encouraged the same cause so I felt compelled to do as much as I could for it. I also felt ready to do something for me. To have something goal oriented that I committed committed committed, stuck to and could accomplish, was really important to me after parenting full time.

My goal was to do about the same time that I did over ten years before. Again I ran a few weeks before to prepare, and much to my surprise I was even faster. Now I know that like wine some things get better with age, but I beg to differ with that. When I find a gray hair or spend money on facial serums, or have to get reading glasses, I don't exactly feel like I am getting better. It's then that I think I am over the hill. As far as running hills go I have improved. I think having experienced childbirth and being a mother has helped that.

This year the race came around again, and I wasn't quite as prepared. I only got to take two runs a few days before. My husband wanted to run with me, but we didn't know if there would be childcare at the race. Making a game time decision, we left the kids with someone who has watched them before. She was game so we said a quick goodbye and registered my husband to run. I think we both said to each other that we had to pee but it was too late. It was time to get ready to run.

The horn blew and we were off. I lost him as I tend to get in my own head when running. I listen to my breathing and the sound of my feet hitting the ground. I play around with my strides, challenging myself to take bigger leaps and change the rhythm of my steps. I was pacing myself but not taking it easy.  As soon as I get a bit tired I am reminded how much I hate running, then I have to remind myself to think positively.  All was going fairly well until the hill. I remembered it from last year and it was no joke. It was long and hard. I looked down at each crack in the pavement and decided to just take it one crack at a time. I didn't look ahead at anything except the next crack. I started to count the cracks but the number was going so high and the hill still steep, so I went back to my breath.

Finding it hard to keep breathing deeply and steadily, I began to hit that "wall." That place where you want to give up so badly but you force yourself to keep going. Where the challenge becomes so tough that you wonder if your body can actually handle it.  The fight that goes on in those moments between your head, heart, and body is so intense. It felt so familiar too and then I remembered when I felt it before: childbirth. With my second child I felt so exhausted, and spent. With every contraction, a great deal of stamina seeped out of me. I was losing endurance and sight of how I would get to the end result. I had to muster all that was left though and perceiver. Just like getting to having the  baby, I would get to the end of the race. The hill was done and I was able to put that behind me. I suddenly remembered the kids were left at the start of the race in haste. I began to run faster. I wanted to get back to them, and I also wanted this race to be over. I finished and when I glanced up at the time, it was the fastest I had ever done.

Relieved to be reunited and finished my kids and I had some snack and sat around listening to the award ceremony.  When they announced the third place winner they said "at the age of 41" and I wasn't really paying attention after that because I thought that sounded kind of old to win a medal, but then they said my name. I was shocked! it was a very nice surprise and I was proud of myself. Of course going against the "getting better with age" theory the silver medalist was 26 and the gold was 15! Regardless though I was happy, and I thank my children for putting a fire under me, since I ran back so quickly to make sure they were ok. 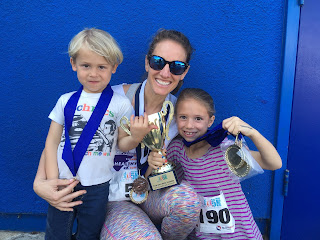