Put Down That Phone

On mothers day I went to a park with my kids. It was a beautiful day and as they played I sat down on a bench and instinctively picked up my phone. My head was down and oblivious to my kids. I was busy looking at photos and posts of everyone else saying "happy mother's day" and staring at cute pictures of other peoples kids instead of looking at my own, the live ones right in front of me. I'm not saying that I should be paying 110% attention to my children at all times, or that they aren't capable of playing without me, but I did realize in that moment that something felt wrong. I felt addicted to the phone and had to have my own personal intervention to put it down.

I decided in that moment that I was going to practice some restraint. I committed to turning off the phone for an hour.  I slid that circle to the right and zipped that phone into my bag. I looked around and took in my surroundings. The first thing I realized is that immediately I was able to slow down time because the just by having my head in the phone while at the park made me feel like I was multi tasking even though I wasn't actually doing anything except cruising Facebook. I stood up and walked around, I noticed what my kids were doing. One was playing chess with a little girl she had just met and my son was climbing up and down a net ladder. He called to me to see and I took him in. I wondered if he had wanted to call to me a few minutes before but saw I was on the phone so he didn't bother. In that moment I thought about how many moments are stolen by my phone. I do not want my children to have to compete with my phone. I don't want my children look over and always see my head down and stuck on a device.  I don't want my children to think it's okay to connect mostly through a phone and not face to face.

Cell phones have been life changing and invaluable but they shouldn't be life stealing. I cringe whenever I see kids at restaurants on their parents phone. Sure, it distracts them and allows us to have a conversation but what about teaching them to sit with us and communicate?  If they are too little for contributing to a conversation what about coloring or bringing small toys to the table?  There is so much hard evidence that too much screen time is bad for our kids but it's so easy to let them stay plugged in since it's such a cheap babysitter. Or is it? The cost of time on devices is pricey. Connection, creativity, boredom, touch, daydreaming, making friends, the list goes on.

I don't know the last time I looked at my kids doing something cool and just watched them. Instead I quickly grab my phone so I can snap a picture so all of my "friends" in my social network can like it, and so that later I can see how it's trending and if anyone comments.  This could have been an opportunity to laugh with my kids but instead I had to capture it. It feels out of control. Social media is great in terms of being able to connect with people that you don't get to see often, and I appreciate that. I have a lot of friends that I wish lived closer or that I don't see because of how crazy our families schedules are. One would argue that maybe I have too many people I love that I don't see enough but when I hear the statement "you don't need any new friends" it sits funny with me. When people stop connecting with new people then there is a problem. After I put down the phone at the park I walked over to the table where my daughter was playing chess, the little girl was sitting with her parents who were helping our girls play. They had moved here from London just a couple of years ago ( I seem to connect with Londoners and their kids for some reason) and our girls were playing so nicely.  They went from chess to riding scooters, and playing handball together. The parents and I talked, and by the end of our time at the park we exchanged numbers. We will likely see them again and had I not put down my phone I would have likely missed an opportunity to meet new people or worse missed a chance for my daughter to continue a new friendship.

I would love to hear what stories can come out of putting down your phone. Challenge yourself and see what comes of powering off. Look how many sentences can start with "Put down that phone..."

and on and on. 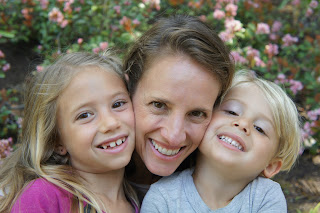