Taking a five day trip without my children wasn't something I had planned on doing for a long time. I have had the travel bug for the last few years and I just kept daydreaming about how we could all hop on a plane, or when we will one day pull the kids out of school and live abroad for six months. I have high hopes that my kids after-school language classes will be enough so they can translate for us when we go to China...someday. If only we had sufficient disposable income, we could visit our close friends in Europe for a weekend. A girl can dream.

Cuba has been on top of my list since I met my husband. On our first date he told stories about his time in Havana. He spoke about how life-changing the country was, how it was a time piece, and how the locals welcomed him when he was there. When he spoke of his experience there was a magic twinkling in his eye. I needed to see it for myself. We had always talked about going together. He even had a website that he created for people who wanted to go from America. Since at that time it wasn't legal to just be a tourist, there were other ways to plan a trip. He made T-shirts that said "Cuba" on the front, and "Travel bans are unAmerican" on the back. We even met with a Cuban family here in LA to plan a trip together, but then I got pregnant, and traveling to Cuba took a seat in the back of one of the old Cuban cars, and drove away...for a while.

This past January when friends of ours were getting married in Havana, the idea popped back in my head. I wanted us to go, but we couldn't figure out a way to both go, and we didn't feel comfortable leaving the kids behind. Then my sister called a month later from Israel, and asked if I would meet her there. She explained that I didn't have much time to decide because she needed to buy her ticket. After a quick conversation with my husband about logistics, I said yes! I booked my ticket and planned my trip.

It wasn't until a week or two before that I realized I wasn't just going to New York or even Europe where I might be far, but I would be reachable. Cuba has little-to-no wifi -- what if my family needed me? What if I needed them?  I got a bit panicked, and questioned my decision. As the days approached, I got teary, scared, and my old friend anxiety reared it's head. I was worried my nerves would ruin my trip, but I was determined to have a good experience. After all, the best travel is equal parts terrifying and thrilling. It is what I craved. I wanted my eyes open to a new place, a new culture, and a new world. That is exactly what I got.

Upon landing in Havana and getting a cab, I learned quickly that I would have to try and speak in Spanish even if I sounded like an idiot. Immediately I could hear my dad's voice in my head saying, "I told you you should've taken Spanish more seriously in school." I definitely didn't work hard enough in that class, and I am sorry now. I got to my casa particular (a home you rent from a local, where they host you, and cook you breakfast) and took in my surroundings. It was unlike anything I had ever seen. It was beautiful and broken at the same time. The city was bustling but the buildings were dilapidated, the colors were vibrant and new, yet as far as my eye could see, everything was from a different era. It was, in fact, a time piece: the cars, the sky, the Malayan surrounding the city -- all of it was a feast for my eyes. My sister and her friend met me there and we had an exciting reunion. The three of us spent the first day or so together, and we kept saying, "Hey, we are in Cuba!"

The first night I went to sleep with a lump in my throat. I missed my husband, I missed my children, and I felt really far away from anything even remotely familiar. I wasn't able to make contact with my family, and it with the first time since being a parent that I couldn't at least tell them goodnight and I love you. I didn't sleep well. The chickens in Cuba are very confused and were clucking in the middle of the night. Time seemed to be moving too slowly and the idea that I would be gone four more nights made my heart hurt. The next day I spent with my sister and her friend, and it was a fun, full and busy day. Still there were so many days ahead, and it felt like a daunting amount of time to be away. I also hadn't spent any real amount of one-on-one time with my sister in years. I know I loved her, I talk to her often, but we also have had troubles seeing eye-to-eye on some visits together in the past. We were never alone though. There were always so many other people, schedules, and family dynamics that came into play when we saw each other. I was worried that those elements would cause us to bicker, or that our individual idiosyncrasies would annoy the other. Traveling well together with other people is not always easy.

The next day my sister's friend left and it was just the two of us. I learned very quickly that telling someone else what you think is wrong with them can only negatively impact your time with them. I am sure she was reminded when she was with me that I had some annoying traits. For example, I don't know anyone who appreciates my sense of timing, because it sucks. We all have our "stuff" but just because thoughts come into my head, doesn't always mean it would be a good idea to say them out loud. So I kept my mouth shut and surprisingly, I started to only see the qualities in my sister that I missed for so long. We had such a good time together. We laughed together at how bad our Spanish was. I was so impressed at how well she knew how to read maps, how she could somehow communicate with a mix of Spanish and Hebrew, when at times only Italian came out of my mouth. We finished conversations that have been interrupted since we both started having children. We rode the local bus, rode every kind of Cuban taxi, and even rode horses. We swam in the bluest water at the beach.We tried food we loved, and food we will be happy to never try again.  We took nightly walks down the street where we stayed and got ice cream for 17 cents, and tried to figure out what flavor it was since none of the words translated.

The night before she left, we went out for dinner at a really beautiful restaurant. Our last day together had been one of the best. We joked that we had done it all, since we had a little list of things we wanted to see and do and we managed to squeeze it all in. We should have been festive mood but instead I felt a flood of anxiety. I was so proud of us for taking this trip and we had an amazing time, but I suddenly got so sad. I mentioned it to my sister, and she helped me. She talked me through exactly what I was feeling, helped me look at what was rational and what was irrational, and then she helped me plan the rest of the time I would be in Havana without her. The way she took care of me was the way she did when I was younger. She has almost nine years on me and I have always looked to her for advice growing up. I grew up though, and so much time had past since she I have needed her in this way, and yet the quality of support she gave me was just as I remembered. I was crying because I missed my family so much and I was relieved to go home, but I was going to miss her.

Like many places in the world, when in Cuba you quickly realize all we take for granted here. There are very few resources available to them. Supermarkets carry only what is available to them so you will see the shelves filled with the six random items they were able to get that week. You feel how far you are from the instant gratification we get from Amazon, Target, and a green tea latte. When asked where I was visiting from, they can only imagine what California would be like. The politics, policies and limitations don't allow for Cubans to travel outside of the country. So while I might have looked around at them and felt grateful for all I have, they looked at us like we were crazy when my sister and I said we live in different countries. Once home my sister and I have quickly jumped back into a day-to-day lives, but Cuba will never be forgotten. We both traveled pretty far for this trip, and what what we found in each other will never be lost again. 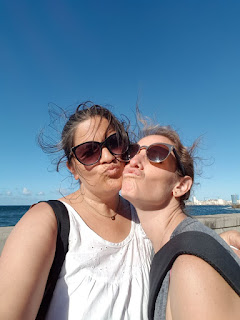