This is not my best week. I know I am not in the minority when I say this is a strange year so far. I am trying to see the bright side. This week however can suck it! I am not happy with the state of our world, our country, and more specifically my house.  As soon as I clean it, it gets messy. As soon as I put out one tantrum, another begins, As soon as I put down a nice meal, the complaints come. My parents moved across the world and I miss them. It's spring time and I am not skipping about it yet. My lips are chapped, my kids a whiner, and I am always running out of time!

Sheesh, that made me feel a bit better. This morning after I dropped my kids off at school, I thought I should get home and get to some of the things I need to do. I realized why I don't run off after dropping them off though. It is my only time to connect with other adults after the chaos of getting them out of the door. I crave those few brief connections I make before I go about my day. This morning I saw a friend who recently lost her dad. I hugged her, we chatted about politics, family, wills, and how we spent our twenties trying to get away from out parents and now we would do anything to be closer to them. I had a bit of a cry, and as we parted ways we hugged again. I really needed it, and took it in.

Yesterday, my son was being really testy. He is definitely going through a rough week himself. He is asserting his independence a lot lately. I doubt he could be much ruder about it. He wants my husband over me from the moment he wakes up. If I am the first person he sees, he lets me know instantly that he is disappointed. It's a pretty awful way to be greeted first thing in the morning. He is obsessed with candy and TV, so when we remind him that we aren't giving in to either one of those requests at 7 in the morning, it's an instant meltdown. There are a lot of tears, usually his. Yesterday, out of nowhere though, he came up to me and gave me a huge hug. I melted. I thanked him and took it in.

Last night, my husband and I were both exhausted. It was after 9 when we finally sat down just the two of us. It was the first time all day that we could discuss something other than the kids. I brought up things that we need to get done, and after a long day of work that was the last thing he wanted to hear. We got into an argument, which is not the norm for us, and he got up and said he was going to bed. It was just a case of poor topic and timing on my end, and it was a pretty awful way to end the day. I sat on the couch for a while, trying to figure out how to turn it around. I didn't come up with anything except to put the day to rest.

When I went upstairs, my daughter was still awake. She was having trouble sleeping and so I sat next to her. She could tell I was upset and she asked if I was okay. When I told her I was sad, she asked why. I answered that I didn't exactly know why. She took me in her arms and hugged me. She rubbed my back, and I took it in. 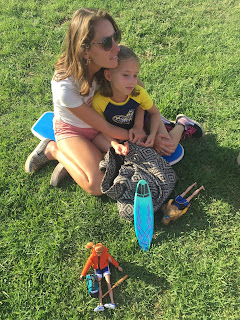