Over the weekend my husband and I went on a date. We went out for an early dinner, and as we sat in the restaurant there was a family with three kids in the adjacent room eating, as well. We went to a new restaurant that put a small sliding door between the game room/bar and the dining area. The game room had a skeeball machine, as well as a pool table and some other games I have never seen. It looked fun, but whoever thought to put the skeeball machine up against the dining area was really not thinking. While we sat down for our one-on-one dinner, we began hearing the whining of the youngest child. I laughed at how we are paying a babysitter so we could listen to someone else's kid cry. I tried to ignore it since I didn't have to fix anything, and I could just sit and have a nice conversation. A moment later though the two older kids began playing skeeball and between the hard balls rolling down the side of the machine and the sound of the balls being thrown I was having a hard time ignoring the noise.

There is so much pressure to a date night when you don't have them often. It's expensive, and if you don't go to a good place it can be disappointing. This restaurant not only planned the design poorly but they also chose some dubious staff members. Our waitress was a bit too friendly and not in the nicest way either. When my husband couldn't decide which beer to get she tried to joke that today would be nice for him to decide. She then tried to laugh it off but it wasn't really funny. Whenever she came back to our table she would say "Yo yo yo, how is it going?" when we didn't quite know how to answer her, we asked her back how she was and she took that as an invitation to sit down at our table. We found out she moved here from Chicago to strip. We awkwardly nodded, squeezing each others legs under the table, and then she said she was kidding, and that she is a comedian. Not a funny one I guess. At this point I was trying to figure out what was going on with our date and can we get it back? That is when she told us about her next show and asked if we were on social media. My husband, being the kind gentleman that he is, took out his phone to add her to his Facebook. When he did she grabbed it and added herself for him, then asked about Instagram, Twitter and Snapchat. Then she looked at me, and begrudgingly I took out my phone so she could grab that one too. She was so inappropriate and invasive that those things alone made her funny, not her jokes. Once I accepted the fact that this would be a noisy strange dinner, we chilled out and enjoyed each other. At the very least we were in agreement that the night was a bit odd, but the company was solid.

The food was actually really good, but we wouldn't go back for all the other reasons. We declined dessert there and went to get ice cream somewhere else. Before we payed our bill I snuggled in close to my husband. I missed losing track of time with him. I missed being spontaneous and driving around to find out where we wanted to go instead of planning it out. I missed traveling with him. I missed sleeping in and reading the paper in bed. I missed staying up late, and I missed unstructured days. I missed going out to the movies and seeing whatever we wanted. I looked over at him and told him that I don't for a second want to rush through my time with my young children, but when they do get bigger and they will, it will be "us" again. There will be a time, and it will come faster than we want it to, that we can do all of those things we miss together.

For now though, we are on this ride. As bumpy, exhausting, and and difficult it can be, it is also magical, loving and wonderful. As we walked out of the restaurant that night, after that family had left I couldn't help myself: I played a game or two of skeeball. It is my favorite arcade game and I just couldn't walk past it. I didn't play too long since I didn't want to interrupt the other diners. After all, it was a pretty obnoxious sound to eat with, but I did stop to have fun for a second. If I keep waiting for that one day to come to start enjoying impromptu opportunities, I am going to miss out.  From now on, I want "one day" to start today. 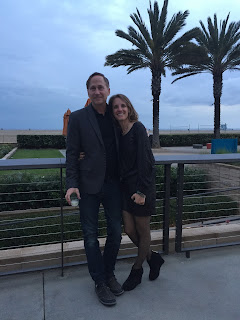