You Are Embarrassing Me

Kids seem to be staying young and innocent for far less time. I am not allowed to walk down the street hand and hand, singing a song with my daughter anymore. In fact I can barely hold her hand let alone sing. I am now a mother who is capable of embarrassing my child. How did I get here already?

I have a pretty sensitive daughter and she is at the age where she is aware of how she is being perceived. I think this is normal, I just didn't think cute ponytails, her rainbow leg warmers, or enjoying her brother's company in public would be embarrassing at age 8. I thought we would have a little more time. I really can't believe when I go to kiss her head nightly before I go to sleep that her body is as long as it is. Third grade is big kid stuff, and it appears that every year my kids keep getting bigger, as they should, but I wish it didn't have to feel so fast.

Every cliche starts to hold more and more meaning for me now that I am a mother. I am a sensitive one myself, and the apple doesn't fall far from the tree. Transitions are hard for her the way they are hard for me, but this year she adjusted to going off to school better than she ever has. Mostly because she knew who her teacher would be, she knew lots of friends in her class, and because she knew she is old enough that she might feel lonely being the only one crying by the doorway of the class since she would likely be the only one. Peer pressure is no joke.


I do wish she would have less of this self awareness, not just to keep her a little kid longer, but because life is more fun when you care a little less about what others think of you. Today when I dropped her off at school, she saw a friend of hers had broken her leg. She had a hot pink cast with sparkles and was sitting in a stroller. Now this I admit would be hard for any eight year old to pull off, but this kid was able to laugh at herself, so everyone laughed with her. I remember last year hearing a story of two sisters who came to school one day in pajamas thinking it was pajama day. They arrived to school only to see everyone was dressed like any other day. One sister was terribly embarrassed and wanted to go home, and the other laughed when someone asked her why she was in pajamas. She was able to make a joke about how she didn't feel like getting dressed.

Michelle Obama did a special recently on girls living in poverty all around the world. There was a girl who woke up at four in the morning, feeds and bathes her brothers and sisters, and then takes herself to school. Her given name was Janet Jackson, and when asked if she liked to sing, she answered yes and broke out into a song right then and there. She may have more responsibility than most children do, and her reality is anything but easy, but somehow this girl had so much more confidence than I see in girls who have much more. I do wonder where that unabashed joy comes from. Often times I wonder if a simpler life is a happier life. I'm not sure if I chose to go with out texting, social media or watching the news, how successful I would be. There is no doubt I would have a lot more time on my hands. Perhaps, I would be more confident and unabashed if I had no idea what was happening with everyone else around me. It would certainly make an interesting social experiment. I would also certainly miss out on a lot. Or would I? 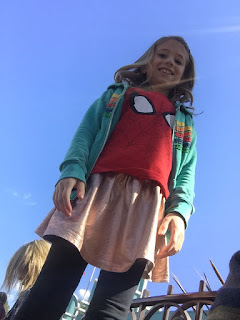