Five has been a challenge. Five was a magical year and milestone when my daughter reached it, but every kid is so different. Five with my son has been full of surprises. He has had a difficult time adjusting to going to school all day, spends a lot of time cranky or hungry or both, and he has had bigger meltdowns this year than I have seen to date since being a mom. This past week included some pretty fantastic additions to the "I would like to forget some of this five stuff" list in my head. I know when I am calmer and perhaps less vain, I will be able to laugh at this week with the rest of you.

Wednesday when I picked my sweet innocent child up at school, he seemed to have received a hair cut during the Kindergarten day. When I asked him if he cut it, he denied it. I asked him if someone else cut it, and he said no. I asked him if we should go and see if his teacher and if maybe she knew anything about it, and he said, "OK, but I will play in the yard while you talk to her." I told him he had to come with me and when we got three feet away he confessed. His confessions always start the same way: "Please don't be mad but..." to which I thank him for his honesty and then try to redirect my anger.

His hair was bad. He had long hair in front and he started somewhere in the middle of his forehead and cut out to the side and then down. I'm not going to lie, it reminded me of Jim Carrey in "Dumb and Dumber." His teacher explained that she was working one on one with another child when another child (bless the whistle blower) got her attention to tell her that three kids were cutting their hair. If they had anymore time to cut he might be bald now. Instead, the little girl got layers, he got weird bangs, and the other little boy, well he cut all the way to his head to his hairline and now sports a crew cut. We got my son's hair fixed this weekend too, but I am still sad because every time he gets a cut he seems to look less and less like my baby.

On the subject of not a baby anymore, in the car to get his hair fixed he asked me if "fuck" was a bad word. He said it so matter of fact and truly had no idea what the word was. My daughter in the back with him looked so surprised. She is quite in the know now with words like this, so she watched wide eyed how my husband and I were going to get out of this one. We said it was a bad word, yes. He then asked again using the word again. "What does fuck mean?" I explained that it was kind of a lazy word people use when they can't figure out what else to say. I am speaking quickly at this point and winging it.  We changed the subject and hoped that would be that.

Yesterday, he got a new stuffed animal, a dragon. He called it "Drugs" until his sister explained that drugs are kind of bad. I explained that drugs can be medicine so maybe you could pick a different name. He asked if he could call the dragon "Fuck," at which point I literally pulled over the car. He repeated the word, emphasizing every consonant, before my husband explained that it isn't a word we can just say. We talked a little more about why, and then tried to hide our laughter from the front seat. No denying it sounds pretty funny coming from a five year old.

All in all, we will survive this four letter word "five" and the other word I was hoping he wouldn't learn yet.  Five is not all bad. I still get the most amazing unsolicited hugs and kisses.  I am amazed at the wonder of how much he is learning. I treasure watching him learn to read, and the magic that happens when he picks up a book, His smiles are infectious and he can make me laugh hard. I am so sad we are nearing the end of the milestone of five and kindergarten. I want to hold on to my little one a little longer. Oh and also, I hope that he learns safer scissor skills and that if he is going to use the f-word that it should have been what he said when he saw his own haircut. 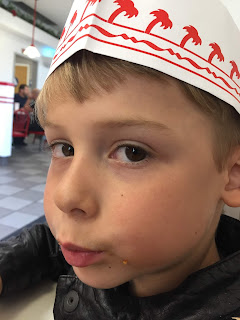