There are over eight years difference between my sister and me. My parents had a daughter and a son, two years apart. When their kids were about seven and five they packed up their city life for a year and headed to Israel and Europe for an adventure. After being told they could not conceive anymore children, they were in for a surprise when more than halfway through their trip, my mother discovered she was pregnant. Suddenly, the family of four became five, and I am pretty sure I may have rocked the boat a bit here and there along the way.

With such a big age difference, my sister and I definitely didn't sit down and play together. I did look up to her in a major way though. My parents both worked and I spent a lot of time in the care of my big sister. I wanted to follow her footsteps, and loved when she would put rainbow glitter on my nails to match hers, draw hearts on my red down jacket, or take me to see Gandhi with she and her friends. I would never admit it then at age 7, but I was bored out of my mind. I just really wanted to be with her, so I was willing to sit through a three hour movie that went completely over my head, just to sit next to her.

When I was nine, my sister left for a year to move to Israel. A year is a very long time when you are nine, and it devastated me to have to say goodbye to her. She wrote me long letters on those old air mail pieces of stationery, we sent her care packages from home and we went to visit her one time in the middle of the year — but I truly missed her. Little did I know that once she came back at the end of that year, that she would soon after leave for college. Despite never being geographically close again, our relationship was still strong. A couple of years, marriages and children later, she came for a visit to LA. It became clear within a day or two that we hadn't really spent time in the same place in years, and that you can't always pick up where you left off. It was a bumpy visit, and I felt like we had to get to know each other all over again. By the time we started to, she was back on a plane to Israel.

A year and half ago, she asked if I would meet her in Cuba. It was a last minute decision, and one that I am so glad I said yes to. We reconnected over mojitos, sightseeing, and beach days. A year after that she and her youngest son moved back to New York. This move was something I had wished for many years ago. Now, I no longer live there, but it doesn't matter. Having her that much closer is everything. As my parents get older, it is a huge relief to have her living close to them. It is also a pretty beautiful thing having my sister back. We talk all the time, we are involved in each others lives, and we are making up for lost time now. I am so happy to have my big sister back. 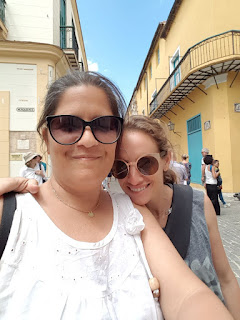