For the past three years I have been heavily involved with my children's PTA at school. Four years ago, a friend of mine, who was ending her two year term, asked me if I would step in as President. I think I laughed. I still had a wee one who was only in school for a few short hours in the morning, and I worked part time. It didn't seem feasible to add one more thing. She was asking a few others though, and fortunately two of them agreed. I hesitantly agreed to be their Vice President. It was a bumpy first year for all of us, but we got through it. The next year only one of them was going to stay on and she asked if I would Co-President with her. I said yes.

I don't write about being a PTA President much. This is not because it isn't full of fodder. There is so much I could write about, but it is not my story alone to share. My partner in this two-year (turned into three) commitment, is so much a part of this experience, that I feel it would betray her to only share my side of any story. This job (that I need to remember does not pay us) is the hardest one I have ever done. It requires skills in so many fields that I had little-to-no experience in, prior to signing on. Human resources, management, business, banking, communications, scheduling, organization -- and an enormous amount of patience. My partner excels in all these areas. There was never a chance that I would ever do this without her.  She and I met when our first children both started at school. She has two younger children, one of which is days apart from my youngest. We were never super close before we started working together, and we have only socialized outside of school a handful of times, but this working relationship we have is the single most successful partnership I have had.

Straight off the bat we learned pretty quickly that we both have very different and complimentary skills. We never stepped on each others toes, and were always there as emotional support for each other when challenges came up, and challenges sure did pop up. On the first day of school last year, we both had to present to the parents directly after we both dropped our babies off for their first day of Kindergarten. We knew we would both be emotional, but she couldn't even look at me because my tears were too contagious for her, and she was much more effective at being the stronger one of us. The strength she had that day was only a tiny amount of what she would need to get her through the year and a half ahead of her. She is a very religious Christian, and her faith is everything to her. Her husband was diagnosed with cancer, and she did her very best to keep it together for him, for her children, and for the school. Before I knew what was happening at home, she had pulled out of an event. I put the event on without her, and knew whatever was going on must be huge for her to step away from a commitment. She had been in the process of trying to foster a child when all of this occurred. When things settled down they finally had a child placed with them -- a little girl with whome we all fell in love. Sadly, she stayed with them for much less time than they had hoped. If I felt like we were robbed of time with this little girl, I knew she really felt it worse. She had a roller coaster of a year and in the spring when her husband was in remission, my mother in law got sick, and then my dad. Together with our new Vice President, she stood next to us in a circle. Our friend who was the VP was a religious Mormon, and so it felt funny for a moment when we had our heads together praying for each other's families. There is a joke beginning there I know, A Christian, a Mormon, and a Jew are running the PTA when...but in reality it was a beautiful example of how loving and respectful our relationship has been towards one another.

Last year was supposed to be out last as Presidents, but we didn't find anyone to take it over. We would not do it again without the other, so we both agreed this year would be our victory lap. We decided we would have a huge party at the end of the school year to celebrate our big finish. We also talked often about what next year would be like without this huge job. We joked about being just plain room parents, and maybe having time to go for lunch together. This year brought more challenges. Her husband's cancer returned and once again she showed incredible strength and dedication to his healing. He is now free of cancer thankfully and her eyes have the twinkle in them that was dulled by her fierce ability to keep it together for those around her. With such a hurdle cleared for them as a family, they realized what was important to them. He got an opportunity to work and live closer to family, and it was too good to pass up. She let me know, and once again she remained strong while tears filled my eyes. I am so very happy for her, but I am trying to process day-to-day life will be like without her.

A few hours after she told me, I texted her to say that above all else, I will just miss her. She will likely not be finishing out the school year, and she keeps apologizing for leaving me hanging. I don't really know what it will be like working without her, but that is not what concerns me. I am so very sad to see her go. I love her spirit, I love seeing her as a mom to her kids, I love the high fives we give each other every morning, and I love that our two little boys sit next to each other at lunch everyday. We may not have had so much time together outside of school, but we sure had plenty of time spent together at school.

Cheers to the future, my fine friend! We may not be finishing this journey together like we thought, but believe you me, we will still be celebrating what we have done this far. I am not going to let you leave without that. 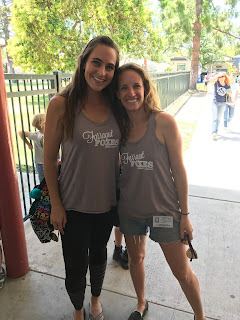