It is not surprising that I cried during the fifth grade culmination ceremony. My sweet girl was chosen to read a speech that she wrote about her elementary school experience. She was keeping it a surprise, and a surprise it was. Her writing took me back through every step of her growth, and the way she read it with so much poise, made it impossible for me to deny how mature she is now. What I didn't expect from that day was how emotional it would be, not just for me but for she and her friends. At the end of the ceremony I got on stage with the rest of the fifth grade committee and we thanked the teachers and principals. When it was my turn to speak, I was holding it all together until I saw that her teacher was also tearing up. When I found my daughter afterward, her face red from crying, I grabbed her and held her. All I could tell her was how very proud of her I was.

After the ceremony, we took her for lunch, and we also stopped by at a friend's house where they were having a little graduation party. It hadn't sunk in though. I was still processing how much bigger the culmination was than I had imagined. The kids put so much time and practice into the performances. Every single child sang, danced, and was highlighted. It was quite impressive. When it was all over, all the students were signed out by their parents — and just like that, they were done with elementary school. I didn't feel celebratory as much as I felt full of emotions. I kept waiting for the excitement to kick in, and I hoped that my melancholy mood didn't take away anything for my child's big day.

We all went to the beach in the afternoon, and the mood lightened as everyone relaxed in the sand together. We had friends to be with and we stayed for hours. That night when this very full day was coming to a close, my girl came into my arms and started to get sad. She realized that her week long sleep away camp was starting only a few days later. She said she was sad to leave so quickly, and scared of going away for the week. This is the third year for her at camp, but the timing of this was overwhelming.

The night before camp was so hard on so many levels. The butterflies in her stomach seemed to multiply. She couldn't stop the tears, and even after saying goodnight she came back downstairs crying. I ultimately fell asleep in my clothes next to her around midnight. She needed so much reassurance that if she needed us, we would be there for her. We promised that if it was bad enough, she could come home. We promised we would check in, but no matter how many times we promised she kept needing to hear it.

The morning of, she woke up, got dressed, but couldn't eat. On the car ride to camp, she began to cry again. She asked me to feel her head, and asked for more reassurance. I turned around and reminded her that we promised, and to stop asking. I explained that her head was thinking in circles, and that it is making her even more nervous. I explained that she had the power to replace some of those fears with excitement. I reminded her that when the repeating thoughts came in that she should imagine a big stop sign, to stop the thoughts, and then change them with something positive. I also told her that the build up to the actual drop off was probably worse than the actual drop off, and that she would likely be okay once she got there.

All of these tools that I passed on to her were taught to me over time. I have not mastered them myself. I certainly did not succeed with many of them when I was her age. In fact I wouldn't dare tell her that I was never quite able to reel in the big hysterics I had at camp when I was a kid. Nor would I share that I couldn't get to the other side of my fears and that I had demanded to be picked up, because I did not want to be at camp. I knew in my gut though that she would be okay. She got out of the car to walk up to sign-in and saw a counselor from last year -- her face changed immediately. She had such a friendly confidence suddenly. When in line to check in a new camper was in front of her. The mom explained to us that it was her daughter's first time, and right away my suddenly happy camper chimed in with, “Oh, you are going to love it, it's great!"

Once she found her group, she bravely hugged and kissed us. She said she would see us Friday. And that was that.

What a whirlwind! The week was so full, for her and for me. She experienced all these new accomplishments and experiences, and I experienced them from the mother perspective, which I think is almost as scary as my first time around. I am so incredibly privileged and grateful to have her as my daughter, and so very happy that she can already apply these coping skills for her fears now. I'm still working on them. 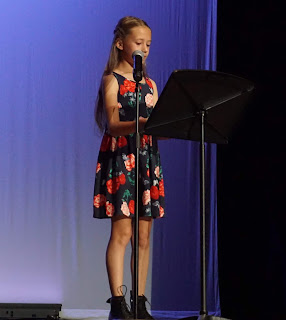