Mean-iacs is a silly word we use in our home to describe someone when we think they're being mean (think maniac meets mean). Sometimes though, we use it when referring to the kid's "friends" at school, when they say unkind things. This year my kids have been coming to me more often than in years past with complaints that kids at school are being mean. I know it is just the age and phase they are in right now. A second grade boy and a middle school girl might be two of the hardest ages. Kids can be mean. I have seen it in my own childhood: I was mean at times, my kids have been mean too. No one escapes it, and it's a phase of childhood that hasn't evolved much. What has changed though is my approach to helping my kids.

When my daughter was little, I read books about empowering her to tell her peers when they upset her. If a friend said something upsetting, she was taught to tell them that what they said wasn't very nice, or to let them know they hurt her feelings. Another approach I tried was just listening, validating their feelings and then letting them navigate the next steps on their own. I also tried to guide them when they came to me, but stopped asking it about the issues the day after. I didn't investigate or interrogate them. The issue may have been upsetting the day before but it might be over for them, even if I am still upset about it. No matter what I did though, no single response I have equipped my children with ever really worked.

This year my daughter, who has always been on the diminutive side and never been bothered by it, is bothered by it now. She doesn't wish she was taller, she just wishes the girls who have been making comments about it would stop. She has asked them and they apologize but then they do it again a few days later. My son is experiencing just some typical, age-appropriate bout of snarky, but it is frustrating none the less. He will share news on joining Cub Scouts, or skiing his first black diamond run and a kid will say something like "who cares?!" He doesn't cry about it at school, but he comes home hurt. I have been trying to support them with my arsenal of tools, but now it's time to toughen them up a bit. I am giving them sarcastic comebacks, and I didn't think I would ever use it with my kids, but my inner Queens is coming out.

When I was nine, I was hanging in the basement with a few kids from my neighborhood. Allen, a kid my age told me I was too slow to run with all of them. Without saying a word, I stood up and punched him in the gut. This accomplished nothing good in the moment and I actually got hurt when I was punched back, but I stood up for myself and Allen never said anything like that to me again. I am in no way telling my kids to punch, hit or even touch anyone on the shoulder. I am going to suggest though that they start speaking up and out a bit more. They are smart and quick and when all else fails -- try something else. If someone asks my daughter how the weather is down there, she should tell them its hard to breath because they are taking up all the air. If someone responds to my son with a "who cares?" he should tell them he does. If they don't stop, I will suggest they walk away, but maybe just maybe kids will learn when to stop being hurtful. Maybe I take it even harder than they do, but I know they aren't too happy with the tools they have had so far. I have to give them a few more options though before they turn all bridge and tunnel on their friends. 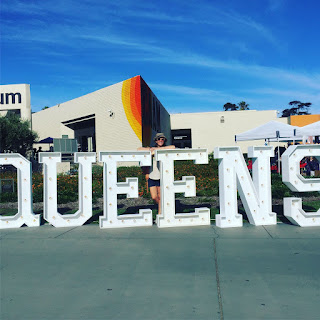