My husband and I went out for dinner a few nights ago. It is rare for us to do this during the week, but my parents were visiting so we had them stay with the kids. When we returned both kids were fast asleep in their beds. I kissed their foreheads and went to bed. The next morning was a school day, so bright and early with the sun we all began to wake up to get ready. Before I could get out of bed, my son comes dashing up onto my lap. He begins to tell me that he lost his tooth before he went to bed. He didn't want us to know, or Grandma and Grandpa to know, because he wanted to see if the tooth fairy was actually real. My heart sank. How was I going to get out of this one? Time had run out to save face.

I began to plan in my mind, how I was going to get him to swear he would not tell a single friend at school that day. Could I convince him that the tooth fairy had overslept and would come again that night? Could he be convinced that the tooth fairy had a very busy night with too many teeth to collect in one night? As I came up short on saving the day, my sadness rushed in. As I looked up his face, I saw a smile. I was confused and unsure what to say next, but I didn't have to, because he was so excited. He explained that the tooth fairy was real and that she left a note, a bath bomb and five dollars. He was so thrilled to read me what she wrote. I could hardly believe it, my eleven year old daughter is actaully the real tooth fairy. Or as far as I am concerened, an angel.

Despite the arguing, bickering and whining between my kids, they truly love each other. They take care of eachother, and when one hurts, the other one feels that hurt. The other night, my daughter was upset and crying and I was trying to get my son to bed. As I laid next to him, he suggested I go to her and give her a hug. When I am walking and holding each of my children's hands I feel full. I feel like I have all the love in the world and I am so grateful. When I see my two children holding eachother's hands, my cup runs over, and I am complete. For that moment anyway. It usually doesn't last long, but it is magical when it does. Realizing that my daughter cared enough to give her own money to her brother, so that he wasn't let down by the tooth fairy, I felt proud. I felt happy and relieved too, but I love how they love each other.

When there was a moment that morning that I could thank her, without her brother noticing, I did. I hugged her and told her how grateful I was for what she did. She smiled, and then quickly responsed with "You owe me five dollars." Fair is fair, and I will pay her back. I owe her a lot more than that though. 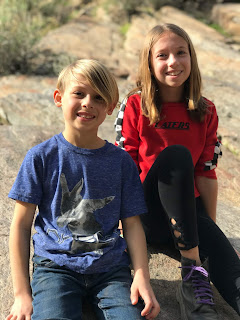