One week has passed since we have been socially distancing. For an extrovert like myself, I am finding this all so challenging. We have found some positive alternatives to spending time together. I have been using Zoom, Houseparty and FaceTime to see people. I have been talking to friends in my challenging through balconies and window screens. We have driven to our friends house and stood outside our car to chat with them from a safe distance. I am committed to my husband but I fantasize about hugging my friends. This is not natural for us as humans. I fear that this time, while it's bringing us all closer in some ways, it will likely have some damaging effects on the future of how we connect. So much is yet to be seen.

In the grand scheme of things, this is but a moment in time. Historically, every one hundred years or so, illness take hold of society like this. We are living this history together now. By making the sacrifice to not live our day to day lives the way we were, we are trying to save lives. Intellectually, I get that, but emotionally, I am still in shock from the speed at which are lives all changed. Just hearing about how long this will be going on overwhelms me. It is taking time for us to adjust to this new lifestyle and then when it all ends, it will once again take us time to adjust back.

When life gives me lemons, I usually run to make lemonade with my friends. I miss them more than ever now. Sure these calls and virtual visits are helpful, but I miss sitting across from my friends and just talking. I miss hiking with friends, I miss grabbing lunch with them and I miss hugs. My friend Orit and I have gone through a lot of monumental experiences together. We met in a small Kundalini yoga class, taught by a pretty odd guy. He preached a lot and went off on some strange rants. Orit and I started talking after class. We bonded on having come out of that class relatively as grounded as we were when we went in. When we met, she was married. I was single and living alone. We hiked often, and got to be close friends. When she got pregnant, she was my first friend to have a baby. Much of my income back then was made from babysitting. I did not feel grown up enough to have a baby myself, but I was inspired when Orit did.

By the time her son was a year old, I was dating David. Although we didn't plan on getting married right away, we talked often about how we both wanted children. When I saw him playing with her son at her house, I was excited about the possibility of having a child with him. Orit supported me through a few hurdles I faced between dating David and marrying him. I got pregnant when we were engaged and had planned on doing so much of the wedding myself. I got so sick during my pregnancies though. She helped me, by providing me with different remedies to try, she did the bouquets for my wedding and even picked up my veil at my house on my wedding day because I had forgotten to bring it down with me to the venue.

Having been such a tuned-in mother to her son, I often called Orit with parenting questions during those first few years. When David and I decided to have a second child, I was delighted to be pregnant at the same time with Orit. This time she was having another boy, but not hers. She was a surrogate for another couple. She was at our house with her son, the night she went into labor. Every year on that date I try to call her to say "Happy giving birthday." A few months later when I gave birth, Orit was there, as my friend, my doula and my photographer. In the long hours of labor, I hit a standstill in progress. The doctor implied it was time to think about a c-section, David asked me what I wanted to do and Orit in my other ear, came over and told me not to give up. A few hours later, when she sat down to take a break and have a sandwich, David had to run to go get her. I was ready to push and delivered a healthy baby boy of my own.

I was so grateful to share such a beautiful, meaningful, life experience with her. Being pregnant together deepened our already close friendship. She is a talented, creative photographer and artist. Most every photo of our family was taken by her. Much of her photography covers the walls of our home. My favorite wedding photo, was not taken by the photographer we hired, but rather taken by Orit on a toy camera that she brought with her. She snapped a photo of the two of us at the end of the night sitting together on a couch. It hangs in our dining room. Orit's son is now in high school and driving. He is a pretty incredible person, it's not surprising given who his parents are. Two loving creative, supportive people. The three of them make quite the triangle.

We do not live terribly far from one another in miles, but in LA traffic it may as well be a flight away. Last year, just for fun, I sent her a notebook with a letter in it. I invited her to write back whatever and whenever she wanted. A few months later the book was full, after being sent back and forth between us. We sent stories about our lives, recipes, drawings and pictures. I never thought of that way of communicating to replace us seeing each other, but for now it might have to do. So excited to see Orit in person when this is all over. Even if it takes going through LA traffic to get there, it will be worth it. 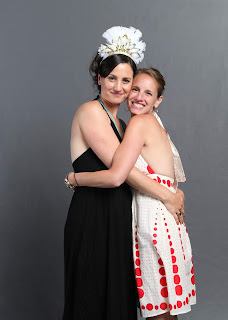