Last week my friend and I took a prenatal yoga class together. At the start of the class, the teacher goes around and asks us how far along we are, and how we are feeling. When it was my friend's turn, she said she was 37 weeks and she was feeling done. The teacher asked if the nursery was ready for the baby at home, and my friend replied "Oh, this baby isn't coming home with me." My friend is a surrogate. She and her husband have a son together who is almost eight. She was never sure if she wanted another baby. She did know though that at some point she would like to help someone who couldn't have their own baby, and carry it for them.

Years ago, I remember being at my friend's house and meeting a couple there. She had twins, and when I asked about them she began to tell me that she didn't carry them. She was very forward about this, and I realized later this woman may have been the inspiration for my friend. Any day now, she will go into labor. It remains to be seen how handing over this baby will impact her, but so far it has been interesting to watch the range of feelings that have come up.

At first, we talked about how this would help her decide if she herself wanted another baby of her own. Within the first trimester her answer to that question was that she was done, and too old for this. As her belly began to grow and her 8-year-old son took interest, he asked if he could have a sibling after they have this baby. She began to ponder if she could do this again. As the due date got closer and closer, more logistics and questions come up. The parents of the baby would love it if she could pump breast milk for the beginning (which she was happy to do. But when they asked her if she would be comfortable nursing the first day or two, that wasn't something she could answer as quickly.

One night when she and her husband were eating ice cream, she asked for a second bowl and her husband joked that she will fatten the baby. Her response was that it wasn't her baby. Even though it is another woman's egg does the fact that it is living off of her mean there is any of her DNA in this baby? Some studies say yes. Not a lot, but some. Is that possibility of a shared biological connection mixed with the oxytocin that comes when she nurses going to make the bond between them grow? Will it make the goodbye difficult. She is prepared that she might feel a range of different emotions in the next few days, weeks, and month.

When I found out nine months ago that she was going to do this, I was jealous of the couple that had the means to use a surrogate. I have such difficult pregnancies and yet was so certain I wanted another baby. I felt my friend would have been such a great surrogate for me. As I write this, now nearly in my sixth month of my own pregnancy, I know that what she is doing is no small thing. In addition to being an amazing gift to give, it is also a complicated one. She has handled it with grace and I am proud of her. When I ask her now about having another baby of her own -- without hesitation, she says if they have another they will adopt. Give one, get one I suppose. 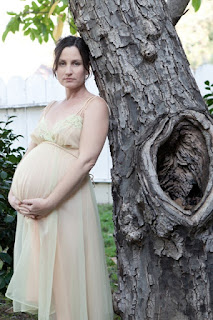