Today is my sweet boy's birthday. He can be such a joy. He sings Beatles songs at the top of his lungs. He loves trains, skateboards, scooters, cars and monster trucks. He loves to play in the dirt, and he loves to swim. He is so affectionate, he kisses and hugs, and won't let his sister start school each day with a big hug and kiss from him before she goes. He says "I love you" a lot. He is beautiful and we are proud. Most of the time.

He can be adorable but he is also a bruiser. He is that kid that you take over to someone's house to play and if someone snatches something out of his hands he will hit them. We just went to a little boy's house to play and when that boy didn't want to share his car, my boy took it from him and hit him in the head with it. Oh, and that's not all. He can be a screamer and a biter too. He wanted a gumball recently (he doesn't chew gum-he turned three yesterday) and I said no and he started screaming in the store. I lifted him up to leave after offering him some other toys, but he just screamed and then scratched and hit me in the face. We are not physically violent people here so he must have a touch of the devil in there somewhere.

I know so much of this is his age, and that he will out grow it (I hope.) I've been the parent who has to apologize for him at the park, and remind him that throwing sand isn't nice. I have read books, articles, asked advice from friends, and tried multiple tools to help him react differently. So far not so successfully. My husband and I are not used to this behavior at all. Our daughter is pretty much the most obedient kid when it comes to school. At home if she acts out inappropriately she pretty much only needs to be told once why what she did wasn't a great idea. There is no reasoning with our son though, no distracting, no negotiating, no listening.

Some of the things we have tried are saying that we don't want him to do that and that it can hurt someone. We have explained after he hits that he doesn't get to be with us when he hits and that we need a little space. Then we try to walk away but he doesn't let us. We both know that the worst things we could do would be to hit, bite or scream back, but somehow sometimes we just can't help it. He evokes some mean parenting in us to and we react. I don't like it nor do I think it has ever been effective, but it has happaned. I have screamed right into his face "STOP HITTING" and if anyone ever yelled like that at me. I am pretty sure I wouldn't ever hit again but not so for him. I fear the day he starts preschool, and all the new parents I will have to apologize to, but I have heard that starting preschool can be the single most helpful thing for kids who hit. They learn by being socialized what is acceptable for others, not just what us parent folks want him to do. So here is hoping that three brings on some positive change. I know three was pretty rough for my daughter but I am hoping since two wasn't so pretty for him at times that three will get better. We are only a few hours in and its not off to the best start but I hear three and a day can be magical! 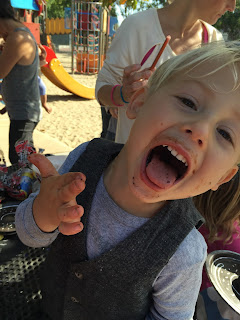