One is how many times I would like to have to ask my kids before they listen. Three is the amount of times I ask before I start getting annoyed.

Five is about the number of times I threaten to take something away if they can't get it together. Zero is the amount of times I tend to follow up on those threats.

Daily, I ask if our morning tomorrow can please go better than this one is going. One out of five is the amount of days we get to school without someone crying.

Two are the amount of emails I have received from my husband with a schedule of how we should operate the morning so it goes well. None, are how many days it went according to the plan. Despite our efforts.

Ten is the number of times this school year we have said we should set an alarm. Two is the amount of days that stuck. One of which we ignored.

One is the amount of days this year that I got up before everyone else in the house, exercised, made breakfast and was dressed before the kids. It was the first day of school. It was a great idea. Fifty two days since that I didn't do that.

This morning, I got my kids out without any tears, we weren't rushed, it was a small miracle and I am proud. We got to the back of school where there is a gate that is usually open. It wasn't today,  and we had no time left to go around to another entrance before my daughter would be late for student council. I made the only rational decision I could think of in that moment, and I had her scale the fence. The first try wasn't successful. She was too scared and didn't want to climb back down the far side of the fence. When she came down to me and said she was afraid, I told her that I believed she could do it. I explained that it was okay either way with me, but that she might be late if we go around. Thats when I saw the fire in her eyes, and she attacked that fence. She stuck her Doc Martins in those diamond shaped holes and swung her leg over the top. The only moment of pure panic came when her leggings got stuck on the top of the fence. I climbed up right to her, mother and daughter scaling together, and I ripped her lavender, (already such dirty pants, so now we can throw them away) right off leaving a tiny hole, and encouraged her to keep going. It was then that she said "Mommy, is this illegal?" I assured her that we were fine as long as there isn't any barbed wire on top, we are good to go. She made is down on the other side. Two feet planted on the ground, with her little brother whining behind me that he wants to try, she looks at me blows out a big exhale and we smile. I tell her "you made it, yay, now go" and she runs off into school. I did not set a great example, and I definitely wasn't thinking about safety first, but she learned she could climb a fence. Those are some mad life skills.

Over one hundred times I have said to my kids "Come on, we can't be late for school" Zero is the times we have been late. Not an option.

Infiniti: the amount of time I will say "I love you, have a great day!" No matter how we get off to school. 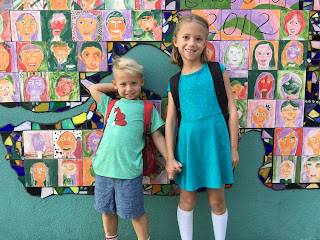