Hillary Clinton's latest anti Trump add was powerful and got my attention. It's a clear and simple message we have heard before: it simply reminds us to be mindful about how we regard body image around our daughters. It showed young teenagers looking in the mirror and observing themselves while Trump's spewing voice-over spoke nasty body shaming comments about women. I am very careful about how I speak around my daughter, and around women in general. We are fortunate to be living in a time where many people are careful, but still so many are not.

We are surrounded by so many mixed messages out there. Eat healthy, yet treat yourself! Gun violence confronts us on an almost daily basis, yet there are movie billboards glorifying guns in a larger than life way. We wouldn't tell our daughters they will be "a player", but people tell my son he is going to be "a little ladies man". There are words, phrases, insults, and curses that my kid's friends are allowed to say that mine are not. I have to explain and undo a lot expressions that I am not okay with, but are no big deal to others. I can let some things go but there is an innocence and ignorance my children have that I would like to protect a little longer. Obviously, with each passing day I let go of my children a bit more, but for now, I hope I can keep a positive impact on how they view things.

My 8-year-old daughter has a friend who already knows about sex. I am not ready to talk to my child about how a baby is really conceived but I would be devastated if her friend told her before I did. This same friend had my daughter asking me what f-u-c-k spelled. I like her friend and I wouldn't keep them apart for these reasons, this child just has a bit of information that I would rather she kept to herself.  My daughter doesn't yet see how any of these things relate to her, but it is only a matter of time. We recently went to a festival that had a rock climbing wall. It was there that my daughter felt how other people view her body, and that did not get past her. The man who helped her put the harness on, said "come here, skinny" as he tightened the straps he said commented on how she doesn't even have a waist. We try so hard to make sure people don't comment on overweight bodies but forget to be mindful of people who are underweight. Any comment about someone's body can be hurtful.

I have read all the articles out there about making sure we speak up and build up our kids by commenting on how strong our girls are bodies are, instead of talking about size, but then we pass bus bench that says, “Wanna better Butt?" This of course brought in questions about what is wrong with that girl's bottom that she needed a better one? Trump is just one man who speaks ill of women, and with any luck, he will quietly go away soon. If not quietly well at least away. Hopefully with any luck she will also never meet him. Unfortunately, I cannot keep her from meeting men as ugly as he is. However, I can and plan to empower her enough that their words are just that, words, and that her heart is the strongest muscle she has. 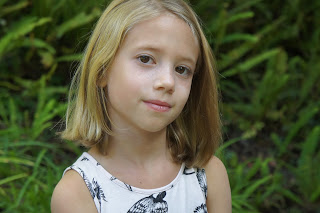