When I was in college, my sister was in law school. We lived together in one house: our parents, her husband and her growing belly. I listened in awe with every new idea — birthing classes, natural birth or c-section, breast feeding or formula. While I had no intention of having a baby at that point in my life. I was so intrigued, and feel undoubtedly formed ideas about how I would do it when that time finally came.

Watching my sister made me realize that the path we choose as a new mother is not always the path we follow. My sister wanted a natural birth so badly, and after hours in labor, ended up with a C-section. The birth of your child is step one in learning that so much of birth and life is out of our control. My sister had also planned on breastfeeding, and that didn't exactly go according to plan, either. She gave birth to her son in the middle of a snow storm in NYC, and finding an available lactation consultant proved to be impossible. We made the best of it — when my nephew wasn't on the breast trying to latch he was in the arms of my dad, or mine, getting nourishment from us via a tiny feeding tube. It was a bonding time for all of us that is sealed with a smile in my memory.

Years later, when my husband I decided we wanted a baby, I was reminded again how things don't always go according to plan. Pregnancy did not come easy for me. After months of trying to have a baby, my husband and I ended up in the ER. It was here where I found out I was pregnant, but that due to lack of blood supply to the baby, it would be a wait-and-see situation. The baby was strong and thriving. I was out of the woods and ready to enjoy pregnancy, but then I began vomiting. I was diagnosed with something called Hyperemesis Gravidarum. Hyperemesis affects less than three percent of women, and it's basically a condition defined by non-stop vomiting. It was awful. Right around the fifteenth week, the nausea finally subsided. As I recovered, and my belly began to grow, my husband and I took a birthing class. The woman who taught the class suggested that when we think about how we would like our births to go. She suggested that we make a birth "wish list" as opposed to a "birth plan.” Little did I know then, that this small change in language would be the best parenting advice I could have ever received.

My pregnancy did not go how I wished. My daughter's birth had elements that I wished for. A few years later my miscarriage wasn't something I wished or planned for. When I got pregnant with my son, I got sick again. I planned on that but certainly didn't wish for it. I had hoped that I could breastfeed my children. It was one wish that came true for me. It felt like one of the only things that came easily after such a difficult pregnancy, and for that I was grateful.

Just like there are many ways for packages to be delivered, there is no one way to have a baby delivered. Snail mail or express. In the end, natural delivery, c-section, drugs or no drugs, at home or in hospital, fertility treatments, egg donors, adoption, the end goal is the same for all new parents.: a healthy child! The same goes for feeding your baby. I have friends who could nurse and didn't want to, and friends who wanted to nurse but couldn't. As new mothers our new responsibility is huge and daunting. We need to make informed educated decisions for what is best for us as individuals. Breast is best for some, but not for all. There are many support groups and lactation consultants for those who need support for nursing, and there are wonderful, healthy alternatives such as those available on the  Honest feeding page for those who choose to use formula. Connecting with your baby is crucial — nursing is a great way to do that, but not the only way.

When I first brought my daughter home from the hospital, I was so overwhelmed with the idea that I had to do everything "right." Like every new mother, I wanted the best for my baby. I went over the top with this idea though and it took me a while to realize that there is no "right" way, or one way for that matter. I remember I was nursing her once, and I got distracted and she came off my breast. Milk sprayed across the room and when I looked down at my baby she had gotten milk sprayed in her eyes. She was fine, but she was covered in drops of milk. I could have laughed, but in that moment, I burst out in tears, as if I had damaged her for life. I was so sensitive and here was this innocent baby looking up at me just wanting to be fed. It was that day that I began to realize I needed to be easier on myself. We were all doing well, healthy, thriving, and if no one is hungry then I shouldn't be crying over spilled milk, even if it is spilled breast milk. I started over that day and began to take heart, that it all works out in the end, but it certainly does not go according to plan. 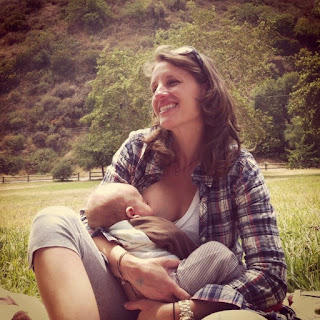